Your Guide to the South Cornwall Coast

From its eastern border with Devon, traced by the banks of the River Tamar, all the way through to its westernmost tip at Land’s End - our ultimate guide to Cornwall’s south coast beaches doesn’t miss a beat. Here you’ll find hand-picked recommendations for the very best of South Cornwall’s top beaches, as well as some fantastic coastal walks, viewpoints and local must-sees along the way. Whether you’re road tripping the whole of the South Coast, or just trying to decide where to stay in Cornwall, you’re in the right place!

Unlike its wild and wavy northern shore, which remains at the mercy of the Atlantic, Cornwall’s south coast is a much more sheltered affair, overlooking the calm waters of the English Channel. Frequently referred to as the ‘Cornish Riviera’ - thanks to its warm microclimate, hidden bays and turquoise waters - South Cornwall’s beaches are reminiscent of scenes from the Mediterranean.

The area’s coastal ecology is also responsible for its unique coves, headlands and natural harbours, birthing the quaint fishing villages, bustling harbours and colourful marinas that the South Coast is famous for. Between its charming towns and dramatic headlands, you’ll find hundreds of stunning sand and shingle beaches - which many would argue are among the best in Europe.

Planning a full tour of Cornwall? Don't forget to check out our guide to the best beaches on Cornwall's north coast too.

Cornwall brings the drama from the very beginning of our coastal tour, at Rame Head on South Cornwall’s easternmost border. Just across the River Tamar from bustling Plymouth in neighbouring Devon, the Rame Peninsula offers spectacular views over the Channel to the south and Whitsand Bay to the west. Park up at Rame Head car park and stroll along the short path up to the historic stone-built St. Michael’s Chapel for breathtaking panoramas. 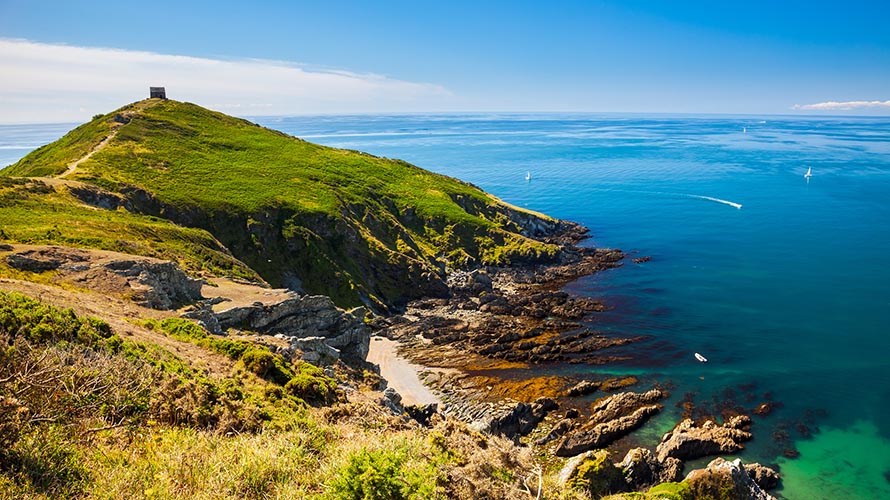 If you’re already itching to feel the sand between your toes, head a few miles west, following Whitsand Bay to Tregantle Beach. Here you can park up near historic Tregantle Fort, built in 1865 to deter French naval invasion, it’s still in use by the military today! The steep path down to the beach is a little tricky in places, but the sandy tidal beach at the bottom is well worth the short scramble if you’re willing and able. 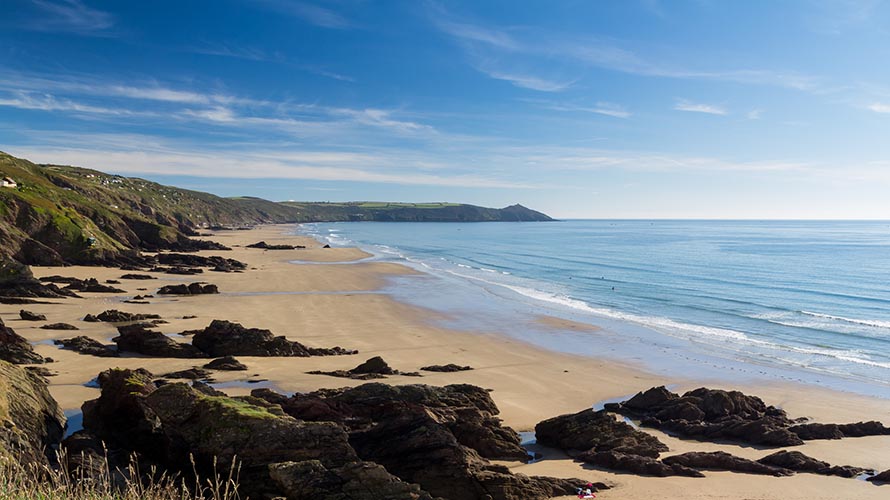 Looking west along Tregantle Beach, back towards Rame Head

No tour of the South Coast’s beaches is complete without a stop in Looe. One of South Cornwall’s most popular gems. This spectacular harbour town sits on the confluence of the East and West Looe Rivers. Try your hand at crabbing off the harbour walls while watching the local fishermen haul in their catch, before dining out on fresh seafood at one of the town’s many charming eateries. 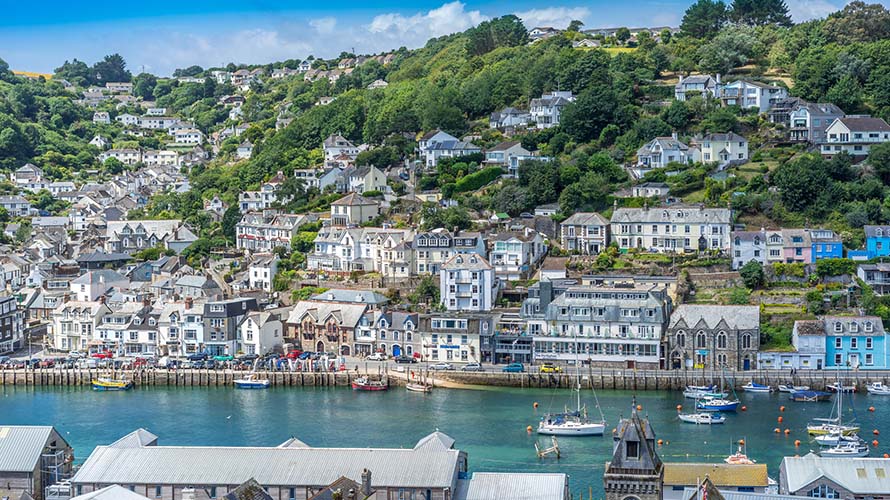 Top tip: Looe can get extremely busy during the school holidays and parking spaces can be hard to find. We recommend parking on the outskirts and walking into the town centre, or catching a local bus during peak season.

You don’t have to wander far to get to the beach in Looe. East Looe Beach, directly alongside the town’s pier, offers soft sand, shallow waters and south-facing sunshine in abundance. Its gentle bottom and sheltered position makes it ideal for swimming and popular with families. 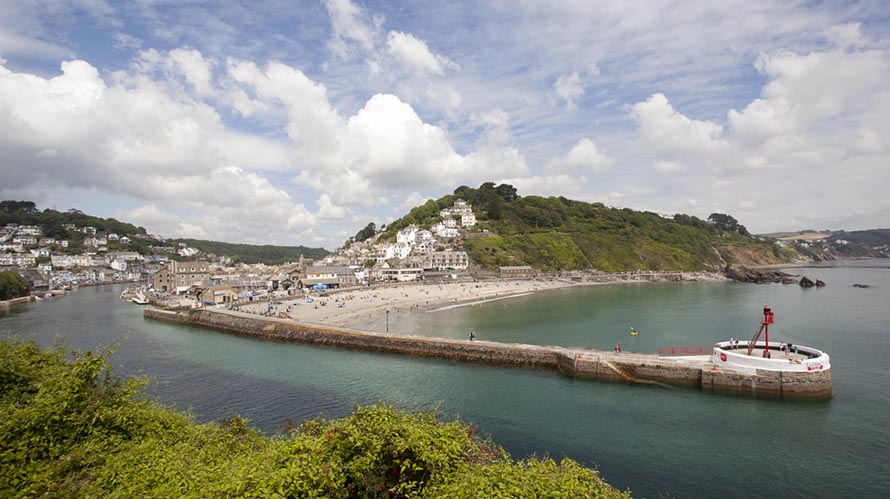 Where to stay: Nearby Looe Bay Holiday Park is just a short drive from the harbour and is the ideal base for exploring much of South Cornwall’s beaches and coastal towns. Offering a wide range of stylish self-catering caravans and great on-park facilities, it’s perfect for both families and couples’ breaks.

Heading a few miles further west along Cornwall’s south coast, you’ll come across one of the region’s most recognisable postcard scenes, Polperro Harbour. What tiny Polperro lacks in size, it makes up for in beauty. If you’re lucky enough to visit on a bright day, the sun’s rays transform the deep blue harbour waters into a dancing array of emeralds. Combined with its traditional white washed cottages, you’d be forgiven for thinking you’d stumbled onto the set of Mamma Mia on a hot summer’s afternoon. 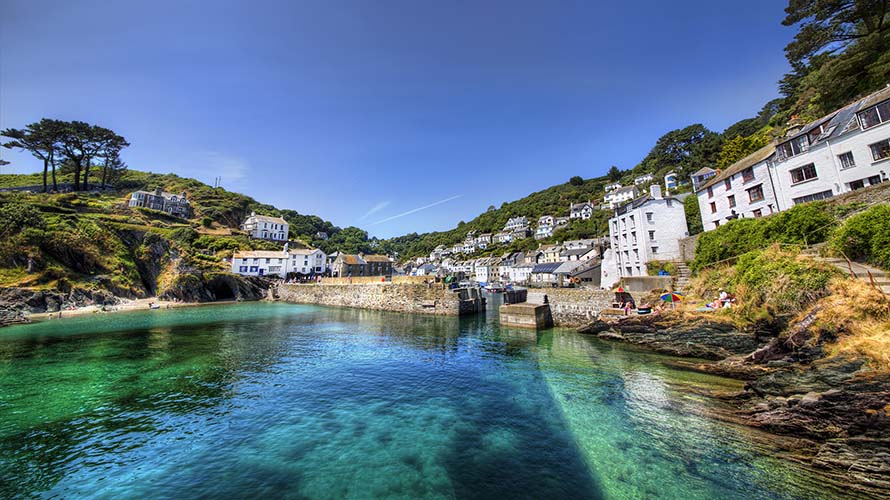 Nanoscopic Polperro Beach, visible on the left in front of the harbour wall

While Polperro Beach is comically small and only visible at low tide, don’t pass up the chance for a quick dip in front of this iconic backdrop. We recommend arriving early as the beach’s small size and popularity means it only takes a handful of visitors to go from empty to crowded. Park up at Polperro public car park and stroll for half a mile along The Coombe to reach the harbour.

Continuing our journey west, the port town of Fowey is a must on any South Cornwall itinerary. Set atop a hillside overlooking the mouth of the River Fowey, this natural harbour is home to many local sailing and fishing boats - as well as quaint cottages, pubs and restaurants and one of our favourite hidden beaches in Cornwall. Plus it’s just a short drive from one of Cornwall’s most iconic attractions, Eden Project in Bodelva. 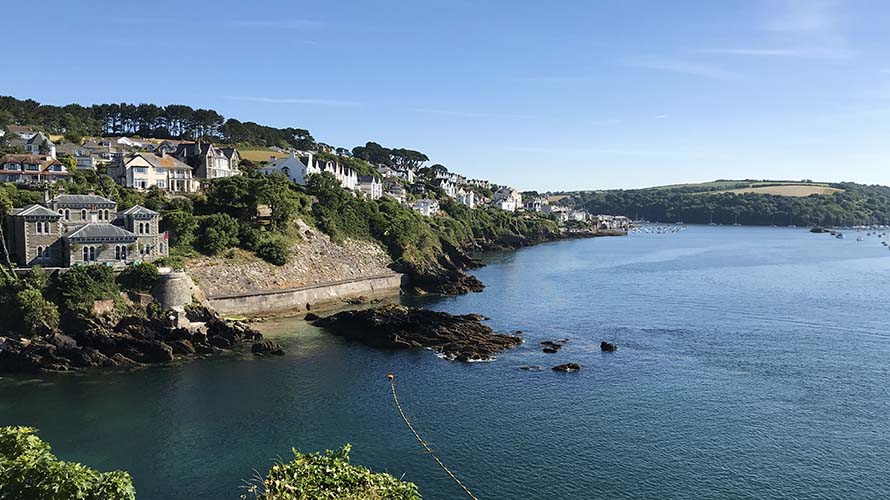 Looking into the mouth of the River Fowey from St. Catherine's Castle viewpoint

Park up at St. Catherine’s Castle car park and stroll down the leafy path to discover Readymoney Cove Beach. Sheltered on both sides, it’s the perfect spot for swimming or just to relax amongst the tree-lined shores - there’s even a floating swim platform moored in the bay. Dry off by walking up the short section of the South West Coastal Path to the historic ruins of St. Catherine’s Castle, where you’ll be rewarded with commanding views of Fowey Harbour and the English Channel. 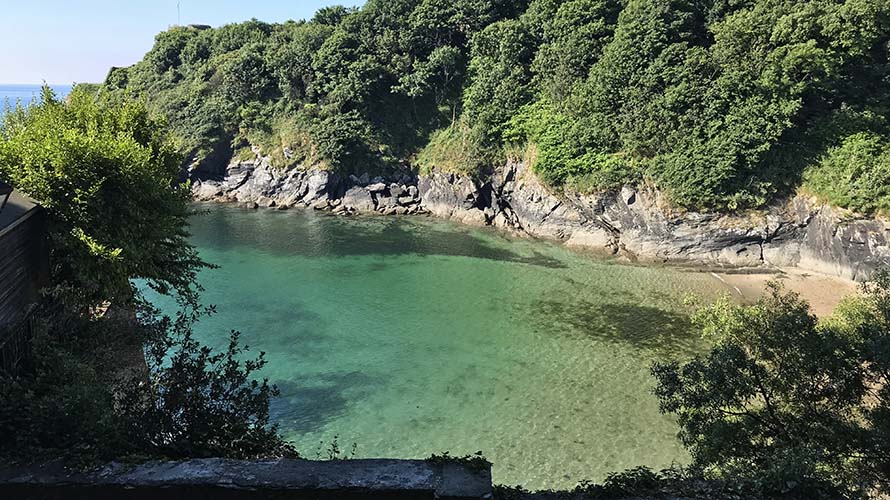 If you’re staying in the area for longer and want to explore another local beach, Lantic Bay Beach is well worth a visit. Hop on the Polruan-Fowey ferry across the harbour and follow the coastal path for just under 3 miles to reach the bay on foot. Alternatively, there’s a National Trust car park nearby. Whatever your means of transport, you’ll be rewarded with spectacular views and a truly breathtaking beach. Take care not to get cut off by the returning tide as you explore the coves, and swimmers should be aware that strong currents are common here. 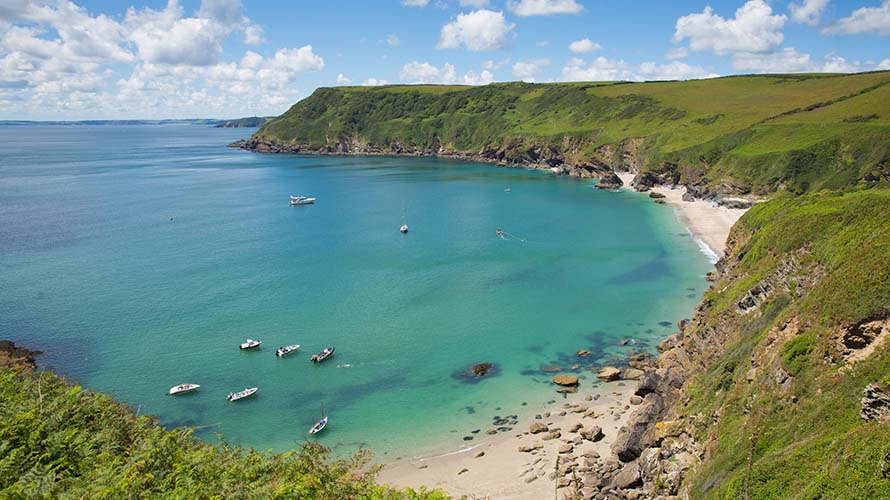 Pressing on further west, and beyond the halfway point of Cornwall’s south coast is the Roseland Heritage Coast, one of Cornwall’s many Areas of Outstanding Natural Beauty. Sandwiched between St Austell and Truro, Cornwall’s only city, this stretch of coastline is incredibly popular for walking holidays thanks to the South West Coastal Path meandering along its shoreline. It’s a haven for beach lovers too, with a scattering of peaceful and hidden sandy bays to reward those who venture beyond Cornwall’s tourist towns.

Nestled in sheltered south-facing Gerrans Bay, you’ll find two of South Cornwall’s quieter beaches, Pendower Beach and Carne Beach. Separated by cliffs and just a few hundred meters apart, you can visit both beaches by walking along the stretch of coastal path connecting the two - or via the interconnecting sands at low tide. They’re the perfect choice for those who enjoy peace and quiet and want to get away from the bustle of Cornwall’s flagship beaches. If you’re a confident driver and unphased by Cornwall’s narrowest of lanes, the National Trust car park is just steps from the sand. 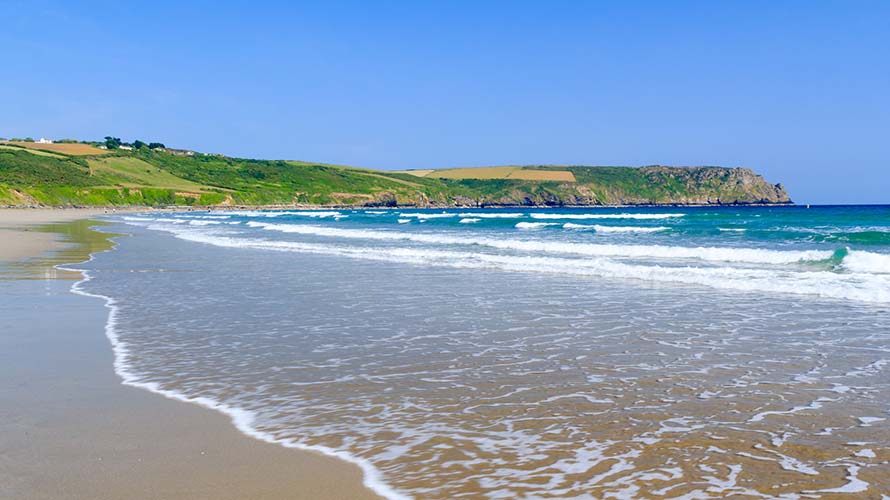 Another family favourite on the Roseland Heritage Coast is Porthcurnick Beach, a sandy, sheltered bay with plenty of rockpools lining its edge during low tide - perfect for kids who love exploring. The car park on the north end of nearby Portscatho makes access to the beach easy. 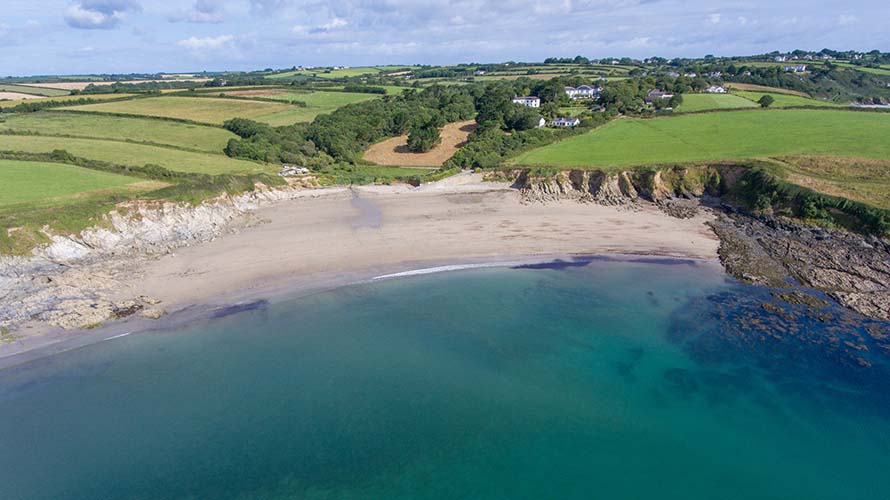 A little further south along the Roseland Coast, you’ll find Towan Beach, not to be confused with Towan Beach in Newquay. Natural, unspoiled and quiet, it’s a great option if you’re trying to escape the summer crowds and is ideal for dog walkers. Parking nearby is limited, however, it’s within easy reach of nearby towns along the coastal path if you’re planning a longer walk.

The southernmost point of Britain’s mainland, the Lizard Peninsula is a popular holiday destination of its own for explorers. The headland’s unique geology is responsible for its spectacular coastal landscape, formed hundreds of millions of years ago as oceanic plates were forced onto the land, rising up out of the sea. Its rich, fertile grounds and unique microclimate are responsible for the Lizard’s exceptionally diverse array of wildlife and flora.

Where to stay: For all out action and family fun, we recommend Lizard Point Holiday Park, situated in the heart of the peninsula and offering a fantastic range of entertainment and activities. If sea views, surfing and sand are more your thing, check out Sea Acres Holiday Park. Both offer a wide range of stylish accommodation, ranging from caravans to lodges and chalets.

The most famous of the Lizard’s, and perhaps South Cornwall’s beaches, Kynance Cove offers something for everyone - soft sand, shallow waters, rock pools, cliffs, coastal paths, views and more. Park up at the National Trust car park and stroll the short distance down to the cove to be greeted with Cornwall’s most iconic vista. It’s the ultimate selfie spot. 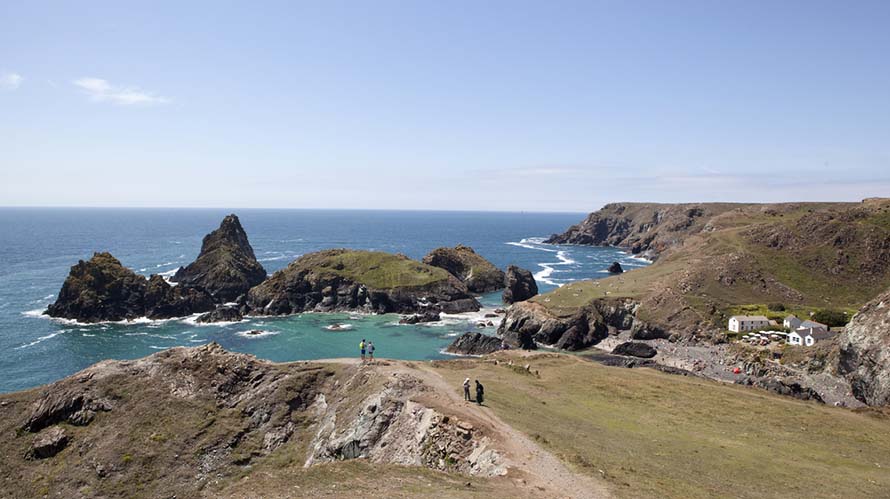 Slap bang in the middle of the Lizard Peninsula’s coastline you’ll find Kennack Sands Beach, just a stone’s throw from Sea Acres Holiday Park. Similar to Kynance Cove and typical of the Lizard’s geology, the beach offers a varied landscape with lots of soft sand, shingle, rock pools and cliffs to explore. Thanks to Kennack’s south-easterly orientation, its waters remain relatively sheltered and calm when conditions on Cornwall’s north coast become too extreme. There’s even a surf school right on the beach if you fancy trying to catch a wave. 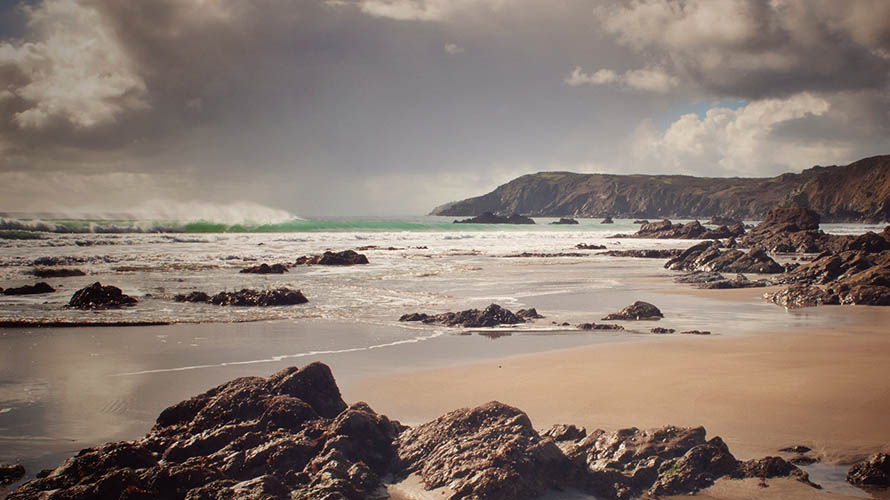 Waves breaking on the reefs in Kennack Sands Bay

Onto the home stretch, Penzance stands as the last major town on Cornwall’s south coast before Land’s End. While there may only be a few more miles of the south coast to cover, those last few miles of Cornwall pack a serious punch when it comes to beaches - saving some of the best for last!

Widely acknowledged as one of South Cornwall’s best beaches, Porthcurno is a favourite amongst locals and tourists alike. This deep sandy cove could easily be mistaken for a tropical paradise on a warm summer’s day, offering up impossibly white sand and turquoise waters. Don’t forget to check out the Minack Theatre sitting atop the cliff overlooking Porthcurno - it’s the perfect vantage point for that picture-postcard photo. Park up at nearby Portcurno car park to visit both! 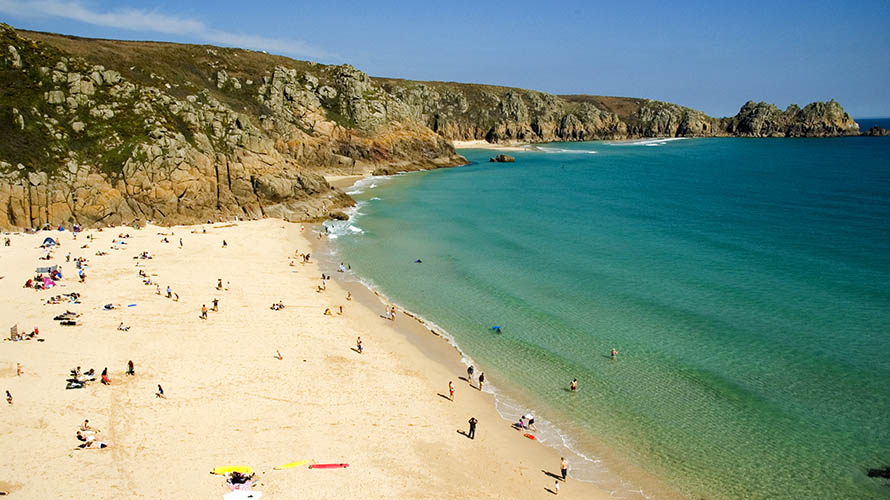 Around 15 minutes’ walk along the bay from Porthcurno Beach is Pedn Vounder. Pronounced ‘Pednee’ by the locals, it’s easily one of the region’s most spectacular beaches and is well worth a visit if you’re a confident climber, with access to the beach limited to a very steep and rocky descent. Also, make sure you check the tide timings ahead as the beach becomes completely cut off during high tide. However, if you time it right, it’s truly unbeatable. One unique feature is the sand bar that appears in the bay at low tide, creating the illusion of a desert island! Be warned, Pedn Vounder is an unofficial nudist beach, so if you’re easily startled it’s probably best to stick to Porthcurno! 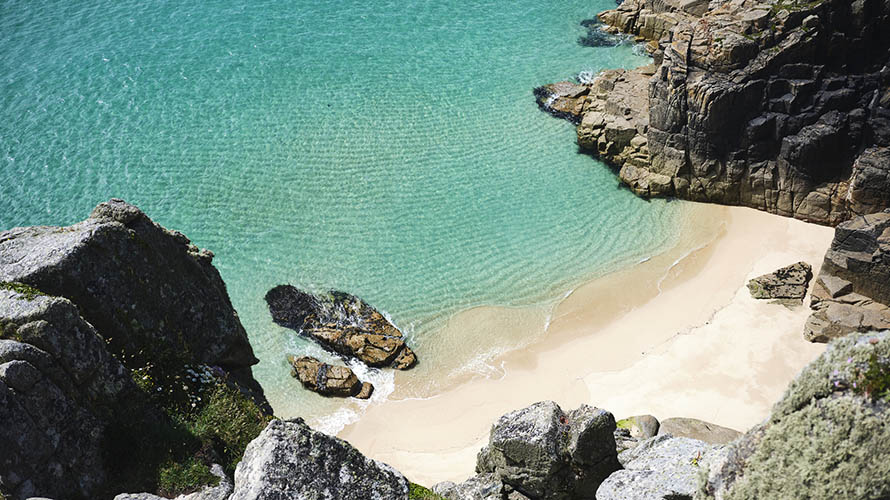 With eight holiday parks to choose from in Cornwall, if you’re looking for a UK beach holiday, Parkdean Resorts have you covered. Explore our Cornwall holidays and book online today.