The Most Popular Toys of Times Gone By

Revisit some of your favourite childhood toys

Christmas didn’t always used to be about spending a fortune on the latest gadgets. In past decades, the toys at the top of every child’s wish list cost less than a pint of milk does now, and would have brought them just as much family fun on the big day.

Here at Parkdean Resorts, we’re all about making memories with the family, and that’s why we’ve taken a trip down memory lane to revisit some of the UK’s favourite childhood toys.

We’ve gone back in time to discover which toy was at the top of your Christmas list, and how much they would have set your parents back.

Join us on our journey and be prepared - it might make you a bit emotional.

Chemistry and wagons dominated the 20s

If you were a child in the 1920s, there’s a good chance you’d be asking Santa for a chemistry set to be put under your tree. Costing £3.62 at the time (which although today doesn’t seem like a lot, back in the 1920’s this was the equivalent to around a whopping £137), these sets included everything a young scientist would need to make things fizz, fume and pop.

Over the past 12 months, 14,800 people searched for these sets, showing there’s still a demand for things that go fizzle and pop.

In the same decade, another toy was proving popular without the risk of explosion - the Radio Flyer classic red wagon. These wagons cost even less, at only £2.18, and provided hours of fun carting books, rocks, other toys and children around anywhere you wanted to go.

There were 74,000 searches for Red Flyer wagons in the past year, and if you’ve still got an original, you could be set to make a decent profit - wagons in good condition can go from £50 to £200 to the right person.

The 30s arrived with a bang

By the arrival of the 30s, there was a surge in popularity for the Buck Rogers Pocket Pistol. Only costing 37p at the time, these very realistic looking toy guns let kids run around reenacting their favourite western scenes, or playing cowboy with their friends, with a satisfying little pop going off when the trigger was squeezed.

They’re hard to come by these days, and have become a real collector’s item.

If you wanted less big bangs and more small inspection, another huge favourite was the microscope. Despite being quite scientific pieces of kit, you’d only need to pay 25p to bring a microscope home, letting kids get up close and personal with whatever they could find to put on a slide.

Only 1,900 people searched for them last year, but if you’ve got one lying about it’s worth holding onto - the price has gone up to around £250. Not a bad little profit.

The 1940s were when LEGO came to play

A toy from the past that still very much has a place in the present, LEGO first hit the shelves in the 1940s, and changed the way we played forever. A set back then would only cost £4.10, unlike the hundreds you can expect to pay for a kit now, and got kids building, breaking and creating all kinds of things.

Now LEGO sets cover everything, from sports cars to magical schools and mythical monsters, and with over two billion searches for them over the past 12 months, they’re going nowhere fast.

Maybe you could build your favourite Parkdean Resorts holiday park. Just an idea.

Battling LEGO under the Christmas tree was Slinky. The simple wire coil mesmerised children with its gravity-defying displays, seemingly hovering in the air when dropped and, more famously, going down the stairs without ever falling over.

Slinky’s success didn't stop there. In the Vietnam War it was used as a portable radio antenna, and has even gone into space with NASA. They’re still in high demand - 135,000 people looked them up last year.

Having sold over one billion dolls worldwide, it’s safe to say Barbie may well be one of the most successful pieces of plastic ever. The iconic blond-haired Barbie's success was in part to it being everything to everyone, one of the first toys to allow kids of all cultures, backgrounds, abilities to find and customise their very own best friend, which only cost £2.18 at the time.

Anything Barbie can do, you can do too. And while a decade later a lot of that might have involved being kidnapped by your brother’s Action Man, she really showed that anything is possible. There are over 2.4 billion searches for Barbie every year, showing how she’s still inspiring children 62 years after she was released.

At the other end of the plastic style spectrum, Mr Potato Head was also sprouting out in the 50s. Back then, 71p got you a lot, including a base potato, detachable eyes, nose, mouth, hat, and a whole range of fashionable accessories. He went on to get married to Mrs Potato Head, and even found fame on the silver screen as a star in the Toy Story movies.

The 1960s saw sketching and screeching

The 60s were a big year for art. Flowers on Campervans, Andy Warhol and children drawing in straight lines on Etch A Sketches. The red plastic rectangle with two white knobs brought out the artist in everyone, with varying levels of quality. Some of us could only manage basic shapes, while others created true works of art that seemed to defy logic.

They only cost £2.17 new, and are still available to buy today if you want to unleash your creative side. There were 90,500 searches for Etch A Sketches last year, so you won’t be alone.

If you preferred your fun more immediate, the 60s had something for you too. Hot Wheels raced into living rooms across the country, and whether you only had the carpet or a custom-built track to drive on, they were lots - and lots - of fun.

The cars were originally designed to look like big American hot rods, hence the name, but over time the brand developed small scale replicas of the cars on the roads. If you could drive it, Hot Wheels could die cast it. A new (toy) car would only have cost 43p back in 1968, but if you’ve still got an original lying about in the loft, a collector would be willing to pay an awful lot more now.

The 70s were a decade of spelling and stretching

Learning can be fun, and it certainly was in the 1970s. The Speak & Spell was a handheld device that taught kids how to spell and pronounce commonly mistaken words. It was aimed at those seven and up, and came with space for game cartridges to allow you to learn in a whole range of ways. It was one of the first ever handheld devices with a visual display, effectively making it the iPhone of its time.

For those who wanted their fun to be more physical than educational, Stretch Armstrong was here to save the day. The TV ad from two decades later famously showed him stretching to stop a bank robbery, and while tales of his flexibility do vary, that didn’t stop us trying to pull him to his limits.

An original doll would stretch your finances to the tune of £7.98, and could stretch himself to a whopping five foot long.

Pockets and puzzles were played with in the 80s

Fun comes in all shapes and sizes, and in the 1980s, one of those sizes was really, really small. Polly Pockets were tiny dolls - less than an inch tall - that came in equally small doll houses, often shaped to look like small carry cases. The dolls could be moved around their homes and fixed into place, and often came inside pendants to help keep them safe.

A Polly set would cost you around £14.51, giving you lots of intricate, fiddly fun that would often go missing underneath the sofa.

There were 1.8 million searches for Polly Pocket last year. She might only be small, but she’s got a massive fan base.

Another toy that required excellent dexterity was the Rubik’s Cube. This 3D puzzle requires players to return it to its original state, via twisting and turning all the coloured panels so that every side matches. For some people, this is easier than it sounds. The world record for a Rubik’s Cube currently stands at a staggering 3.47 seconds, held by Du Yusheng of China. Speedcubing, as it’s known, is one of the most popular variations of the original game, and has helped keep it popular throughout the decades. You’d have paid £1.44 for a cube when it was first released, and around 1.2 million people are still looking for them today.

Were you even a kid in the 90s if you didn’t play with - or run from - a Furby? Was it an owl? Was it a hamster? Was it… watching you? Either way, Furbies were the must-have Christmas present for many when they came out in 1998. The fluffy robots spoke nothing but Furbish at first, but over time would ‘learn’ English, allowing them to communicate with you and let you know what they wanted.

They were so clever that they could repeat certain words when you petted them, leading some intelligence agencies to ban them from their offices, just in case they picked up state secrets.

At £25.39, Furbies are one of the more expensive toys of the past. Their newest offspring comes with a mobile app, showing that they’re only getting more educated. Run.

If you wanted a soft toy that couldn’t talk, you need look no further than Beanie Babies. They were THE collectable of their time, and have been called the first ever internet sensation, such was their popularity.

While some people bought them as toys, others bought them as financial investments, which only drove the hype up further. That hype was jumped on by manufacturers, Ty, who created the world’s first ever consumer-facing website to sell their toys.

The first Beanie Babies only cost £3.63, but now original toys can go for an awful lot more. The most expensive ever was bought for $600,000 at auction.

Bratz and Zhu Zhus saw out the century

To see us into the new century, kids were playing with two different kinds of toy: one, an attitude-filled doll that didn’t pull her punches, and the other, a stuffed toy.

By 2005, their plan had worked. Bratz earned their makers billions of dollars, and even starred in their own TV show and computer games.

On the softer side of the 2000s were the Zhu Zhus. These robot hamsters were so popular that stores couldn’t keep up with demand, which only drove more people wild. Kids couldn’t get enough of how they zoomed around the home, and at only £6.53, parents didn’t mind them much either. There were stories of people queuing up outside shops to get their hands on a hamster, as prices online were hugely inflated to try and cash in on the toy’s cuteness.

If history has taught us anything, it’s that paying over the odds for a soft toy never ends well. 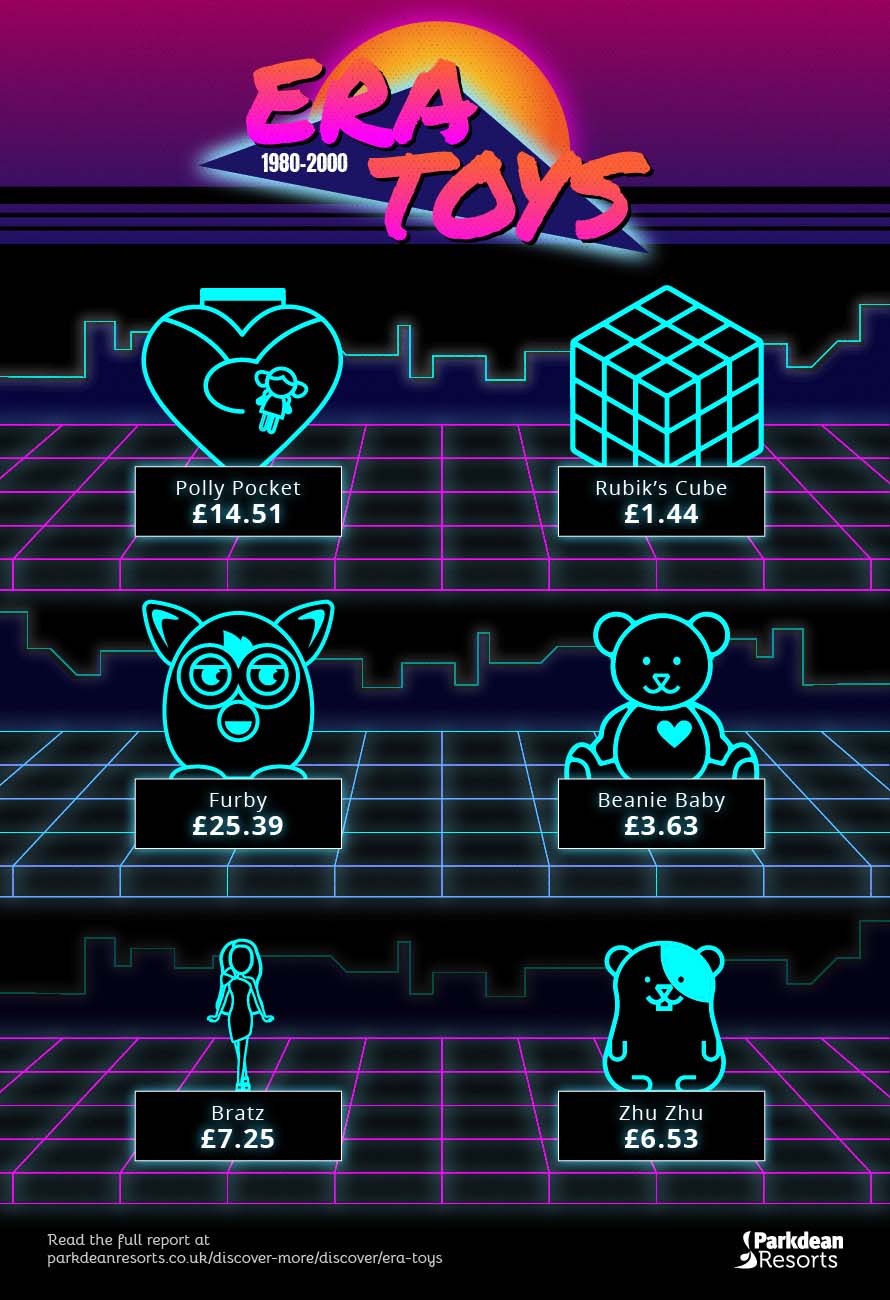 If you remember playing with some of the toys from the past, there’s a chance you’re buying some more modern ones for the kids of today. Will it all be iPads? Will it all cost over £100? Will we ever get back to the glory days of a red wagon for £2.18?

We can’t tell you. All we can say is that if you ever want your kids to put their toys down, there’s plenty of fun to keep them busy on one of our family holidays. Have fun playing.

To gather the data, we looked into the most popular classic/iconic toys during your childhood and found out which toy is still in demand through search volumes and trends, collected during a 12 month period to date.

Festive Things to Do with the Family

Our Top 5 Parks for Kids