5 Best Places to Pick Your Own Fruit

Summer is just around the corner, and with that comes warmer weather. While you might be able to coax your kids outdoors and keep them active, getting them to eat healthy is another challenge altogether! So, why not combine the two by planning a fun day out picking your own fruit?

With hundreds of pick your own (PYO) farms across the country opening their gates during the warmer weather, you’re guaranteed to find a farm near you. Nothing beats wandering through green fields picking your own punnet of delicious and ripe fruit. It’s a fantastic way to get closer to nature, helping your little ones learn where their food comes from and getting them excited about eating healthily - as well as supporting your local farmers.

To get you started, we’ve put together a guide to the UK’s fruit picking seasons - with produce ripe for the picking throughout the summer and autumn months. We’ve also handpicked some of our favourite fruit farms near our holiday parks, making for an ideal day out on your next Parkdean Resorts break.

Don’t forget, the weather affects availability at each farm - so if you’re planning to visit a fruit farm, make sure you call ahead to find out which of their crops are ready to pick.

Strawberries are the quintessential British fruit, and whether you’re enjoying them in a smoothie, with whipped cream or washed down with a glass of bubbly - they’re a firm favourite with the whole family. Growing on leafy runners close to the soil, strawberry picking is a fun afternoon activity kids are sure to enjoy.

Britain’s strawberry season kicks off in early May, reaching its peak in June and July. And, as long as the weather holds, strawberry fans can enjoy picking these delicious red berries well into August and even September.

Where to go strawberry picking

Strawberry fields thrive across the British Isles, with British strawberries widely regarded as some of the best in the world - meaning you’ll be spoilt for choice when it comes to finding a farm. One of our favourites is The Balloon Tree, just outside York and less than an hour from many of our Yorkshire holiday parks.

As well as succulent strawberries, The Balloon Tree’s fields are home to a wide range of fresh produce. Keep an eye on their Facebook page to find out what’s in season. After you’ve filled your punnets, don’t forget to check out their well stocked farm shop for some sweet and savoury treats - stocking up on ingredients for a delicious family meal. 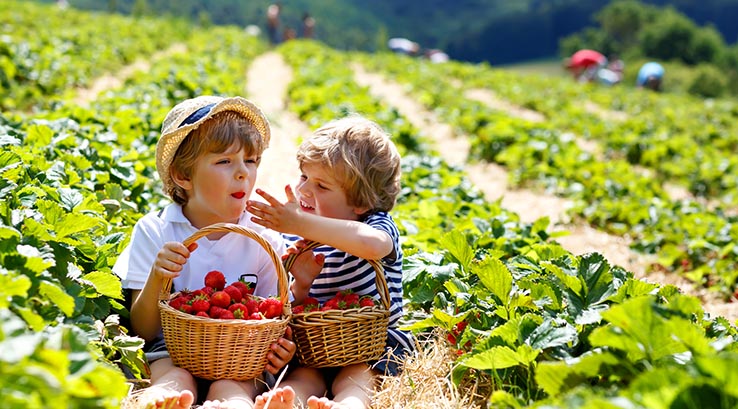 Another British favourite, gooseberries can range from tart to sweet depending when they’re picked. From gooseberry jam to pies, relish and even wine - this delicious little green fruit has found its way into a variety of drinks and dishes over the years.

Gooseberries typically come into season during the midst of summer in June and July - with early crops producing green, firmer fruit that’s perfect for making jams or pies. Later in the season, the fruit swell into juicy, sweet berries which can be eaten raw. Why not liven up a savoury salad by adding a handful of ripe gooseberries to the mix?

Where to go gooseberry picking

Gooseberry bushes thrive in all kinds of soil conditions, and are easy to grow in the garden at home. However, if starting your own crop sounds like too much work, there are plenty of pick your own gooseberry fields across the country. The very best gooseberries grow in sunny spots, so where better to look than the sunny South of England?

Ansty PYO & Farm Shop sits amongst the Wiltshire countryside, just 45 minutes from Sandford Holiday Park and the South Coast. Here you’ll be able to pick gooseberries alongside a variety of other fruit throughout the summer and early autumn. 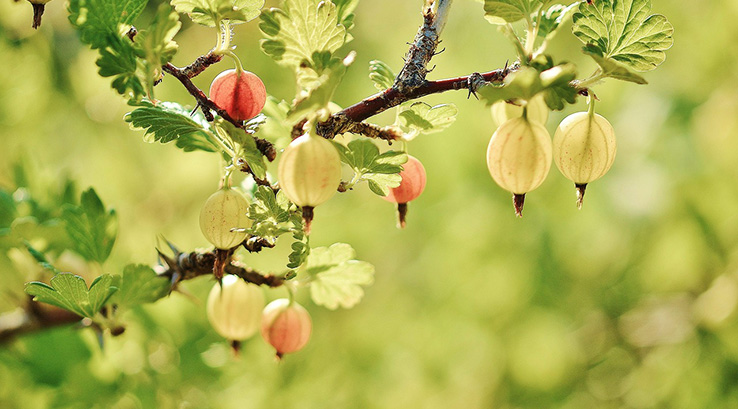 Blackberries can often be found growing amongst wild hedgerows and, as long as you get to them before the birds, a walk through the woods can be particularly fruitful. That being said, cultivated blackberry bushes tend to produce a much bigger crop - and, being so tasty, you’ll want to fill your basket to the brim!

Blackberries tend to ripen in mid to late summer and throughout early autumn, with juicy blackberries found in abundance from mid-July through to September. They’re best picked as soon as they’re ripe and eaten straight away, or washed and frozen to be used in smoothies and desserts later in the year.

Where to go blackberry picking

The North East is home to plenty of wild blackberry and bramble bushes, however, if you can’t locate them in the wild - you’re all but guaranteed to get your fill at Brocksbushes Farm. Just outside the charming village of Corbridge near the banks of the River Tyne,  Brocksbushes is home to a range of fruit fields and a charming farm shop selling local produce.

Just over 30 minutes’ drive from a number of our holiday parks in the North East, a trip to Brocksbushes blackberry farm is the perfect daytime activity. 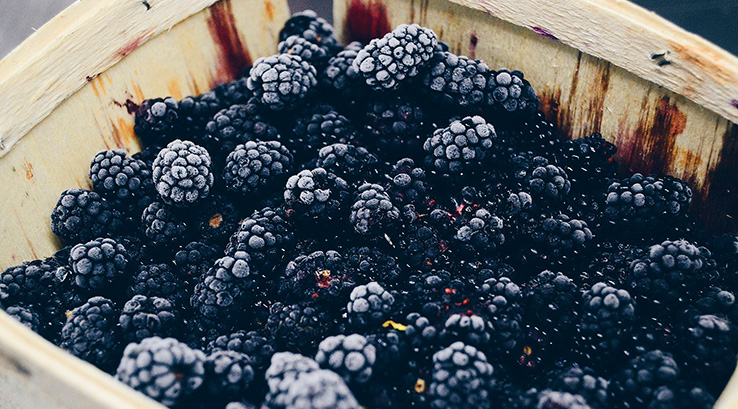 Plum trees can be found across Britain and are relatively easy to grow, you might even be lucky enough to have one growing in your back garden! Their delicious juicy fruit is the perfect sweet treat on a summer’s day and is great for cooking. Whether you’re poaching them in syrup or baking a crumble, plums are fantastic for making tasty desserts.

Late July marks the start of plum season, as the deliciously succulent fruit ripen on the branch. You’ll need to be quick, though, as the season can be quite short - coming to a close in late August. Plums should be picked and eaten straight away when ripe, as they tend to spoil quickly. Alternatively, why not have a go at making your own preserves?

Where to go plum picking

Located just off the M6 in the North Lancashire countryside, Leapers Rock Orchard is home to a wide variety of PYO fruit crops, including juicy plums.

Less than 20 minutes from both Regent Bay and Ocean Edge Holiday Park, a visit to Leapers Rock Orchard is a must if you’re staying near Morecambe Bay. 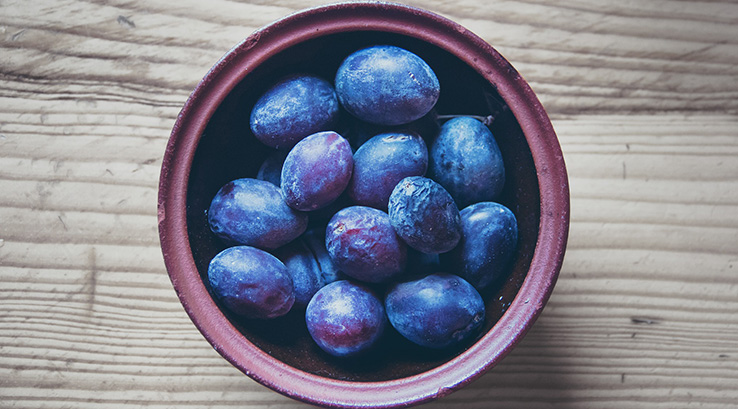 If you’re a little late to the party, fear not - there’s still plenty of fruit in season as the summer months give way to cooler autumn days. Apple picking is the perfect activity for a breezy autumn afternoon, and what better way to warm up than by baking your own delicious apple pie?

Different apple varieties ripen at different times, however, the main harvest tends to be towards the end of summer and early autumn - with September and October being prime time in the apple picking season.

Where to go apple picking

When it comes to picking your own apples, only those fit for a queen will do. That’s why our favourite orchard sits just outside the grounds of Sandringham Estate - one of the Queen’s most prestigious royal retreats on the North Norfolk coast. Originally planted by King George VI, the royal orchard opens its gates to the public for just a few weeks each year - allowing you to wander amongst the trees and pick your own juicy apples. Keep an eye on the Sandringham Estate website for details of this year’s opening dates.

The apples grown here are even used in the apple juice served at Buckingham Palace, and you can purchase a carton to take home from the estate’s visitor centre. If you’re staying at Manor Park or Heacham Beach Holiday Park, Sandringham is just 15 minutes away - and is well worth a visit. 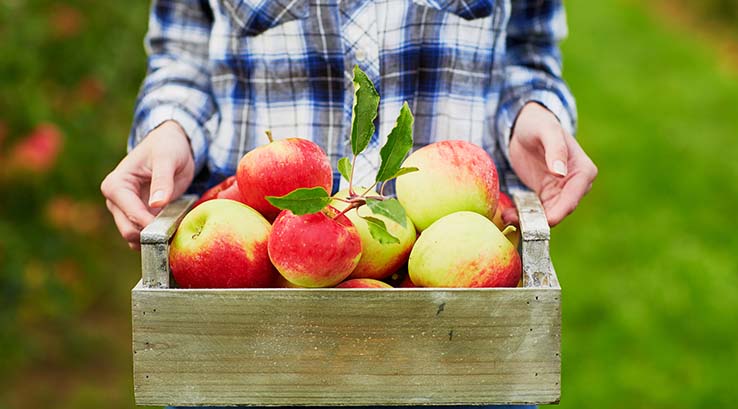 Have you got a favourite local PYO fruit farm? We’d love to hear your recommendations on our Facebook page.

The Best of the Scottish Highlands

5 Reasons to Choose a Staycation