Arguably the most famous walking route in Scotland, the West Highland Way is a long-distance trail connecting the bustling commuter town of Milngavie, in the northern suburbs of Glasgow, to Fort William which is a Highland town nestled at the foot of Ben Nevis.

From the rolling East Dunbartonshire countryside and the winding paths along the banks of Loch Lomond, to the peat bogs of Rannoch Moor and the stunning Glencoe Mountains, the variety of landscapes along the West Highland Way make this a wonderful walk.

The 96 mile-long trail was originally conceived by Tom Hunter, who was a walker and lover of the outdoors. His concept was approved for development in 1974 and the route was officially opened by Lord Mansfield in 1980, becoming the first officially designated long distance walking route in Scotland. It’s estimated that 80,000 people embark on this epic trail every year, with 15,000 walking the entire route.

Much of the walk utilises old military roads, constructed by William Caulfield in the eighteenth century. Over 1,000 miles of these roads were created in northern Scotland in an attempt by the government to quickly deploy forces and bring order to the country, which had been badly affected by the Jacobite Rebellion. General George Wade is also famous for creating a number of military roads, many examples of which can be found on a typical Ordnance Survey map.

75 miles into this epic journey, the trail is enveloped by the picturesque Glencoe Mountain range. Having just navigated through the desolate peat bogs of Rannoch Moor, the change in landscape morphs dramatically from the plateau to spectacular mountain ridges and vertical cliff faces. Home to eight Munros (Scottish mountains over 3,000 feet), the area is perfect for walkers, hill climbers and skiers.

The region is also home to one of the bloodiest events in Scotland’s history, the Glencoe Massacre, where the MacDonald clan were ‘murdered under trust’. After welcoming Robert Campbell’s 120 strong legion of government troops for ten days (per the Highland Hospitality code), they were callously murdered upon the orders of King William III.

Regarded as an act of terror by the state against its own people, the massacre was a result of the Chief of Glencoe, Alasdair MacIain, signing an oath of allegiance to the King eight days after the deadline on the 31st of December 1691. The deadline was missed because the location was purposely changed from Fort William to Inveraray. Missing the deadline was the excuse the government needed (and wanted) to make an example of the Highland Clans, thereby, scaring them into complete allegiance with the King and his government forces.

Despite the area’s gruesome history, set peacefully amongst the hills is the isolated Kings House Hotel, which is a welcome respite for walkers on the West Highland Way. Built in the 17th century, Kings House is believed to be one of Scotland’s oldest licensed inns. The building was used after the Battle of Culloden (1745) as barracks for troops of George III, hence the name Kings House. It was their task to keep the Highlanders under subjection and to capture their elusive champion, Bonnie Prince Charlie. 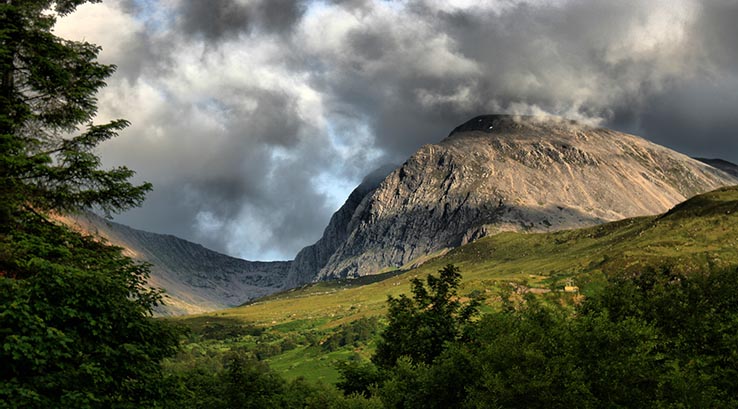 From Kings House, the trail continues along an old military road to the infamous Devils Staircase, a steep 300 metre climb to the WHW’s highest point at 547 metres above sea level. The walk up Buachaille Etive Mor is often considered to be the most dreaded part of the journey. However, the climb is made easier by the winding zig zag shaped path which gradually leads walkers to the mountain pass and up to the top of the hill. The views across Glencoe are wonderful and are a true sight to behold. From here, the trail descends gradually into the town of Kinlochleven. Soon after navigating through Glencoe, the Mamore and Nevis Ranges now form the horizon from here to the end of the trail in Fort William.

After a welcome overnight stay in Kinlochleven, the final stage of the West Highland Way skirts alongside the Mamore mountain range and along the Lairig Mor pass, which is an old drove road that once served as the main access route to the south from Fort William. As the trail closes in on Fort William, there is one final moment of drama with the emergence of Britain’s tallest mountain, Ben Nevis. As if standing guard, protecting the inhabitants of the Highlands, your eyes are transfixed on the famous peak, as if somehow you’re waiting for permission to walk along in its shadows. At the finishing point in the centre of Fort William, you’ll be sure to find numerous places for a well-deserved refreshment before turning in with memories which will last for many years to come.