Thousands of movies have been filmed in Britain, from huge blockbusters to smaller films that you may not have heard of. Many of these filming locations are located all over the country and make a great day out, so here at Parkdean Resorts we've handpicked some of the best ones.

If you’re a Harry Potter fan, then you'll recognise Alnwick Castle from the first two films of the franchise. The grounds and courtyard of the castle were used for several iconic scenes at Hogwarts, such as Harry's first Quidditch lesson in The Philosopher's Stone and the crash landing of the flying car in The Chamber of Secrets.

Dating back 1000 years, Alnwick Castle is one of the largest inhabited castles in the UK. It's been home to the Percy family for the last 100 years, and the 12th Duke of Northumberland, Henry Percy, still lives there with his wife and children.

Along with exploring the castle and grounds and seeing the exact spots where Harry Potter was filmed, there is daily broomstick training, falconry displays, Draqon Quests and plenty of exhibitions to explore at Alnwick.Less than an hour away from Newcastle, the castle is full of interesting history and is a great day out, whatever your age.

Antony House’s stunning setting and magical gardens made it the ideal place to film Tim Burton’s Alice in Wonderland. Most of the filming took place outside, with a couple of scenes in the Victorian studies.

Overlooking the River Lynher in Cornwall, Antony House has been home to the Carew Pole family for 600 years and is managed by the National Trust. It’s believed to be one of the finest Queen Anne buildings that still stands today and is full of portrait collections, tapestries, and period furniture and textiles.

The grounds are the real star of the show at Antony House, where you can follow Alice’s footsteps and explore both the formal and woodland gardens and see where the white rabbits popped out of the long Yew hedges in the film.

Chatsworth House was used as Mr. Darcy’s impressive mansion at Pemberley in the 2005 version of Pride and Prejudice. Both the interior and exterior of the house were used during filming. If you’ve seen the film you’ll recognise the grand staircase and ceiling in the Painted Hall, as well as the Sculpture Gallery.

The scene in the Sculpture Gallery was supposed to be set in a room full of paintings, but it was changed to make use of Chatsworth’s sculpture collection. If you visit the house, you’ll get to see the Vestal Virgin sculpture from this very scene.

Located near Bakewell in Derbyshire, Chatsworth has been passed down through 16 generations of the Cavendish family. The Duke and Duchess of Devonshire currently live there, and as well as being a family home, it’s also a working farm and living landscape. Along with the house, the 105-acre garden has evolved over 450 years and is full of history, where there is plenty to discover from a Victorian rock garden and even a maze.

Although the latest Transformers film isn’t due to come out until next summer, the filming has recently taken place in various parts of North East England. Along with Newcastle city centre and Alnwick, the coastal location of Bamburgh was also used as a backdrop for the Steven Spielberg produced movie.

As well as its beautiful beach, Bamburgh is well-known for the iconic Bamburgh Castle that sits high above the coastline, with amazing views of the sea. Although the castle that stands today was built by the famous first Lord Armstrong in the late Victorian era, there have been settlements on the site since prehistoric times. This has resulted in the area being one of the most important Anglo Saxon archaeological sites in the world and many exciting things have been discovered over the years, such as a wooden paddle and prehistoric pottery.

There are over 2,000 artefacts that you can see at Bamburgh Castle, such as armour, furniture and artwork. After you’ve explored the castle, the beach where Transformers was filmed is home to some impressive sand dunes and is where the first ever lifeboat was launched from, back in the late 1700s. 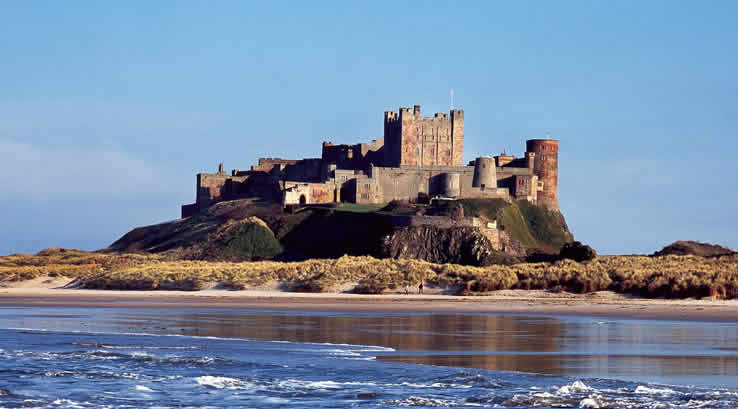 Have you visited any other famous film locations in the UK? If so, we’d love to hear them on our Twitter page.