Where Are The Biggest Disney Fans?

With the world staying indoors, people are amping up their streaming by turning to content like Netflix and Disney Plus as a welcome distraction from lockdown.

Disney Plus launched at the perfect time, capturing the attention of many families who were stuck at home and looking for ways to entertain their kids. According to CNBC, the streaming giant expects to have up to 260 million subscribers by the end of 2024, tripling the forecast they originally set for themselves when they first launched.

That’s a lot of people watching a lot of films. We at Parkdean Resorts wanted to know which films were everyone’s favourites. We gathered data from Google to find out the answer, and mapped the results by country. Did your favourite make the list? 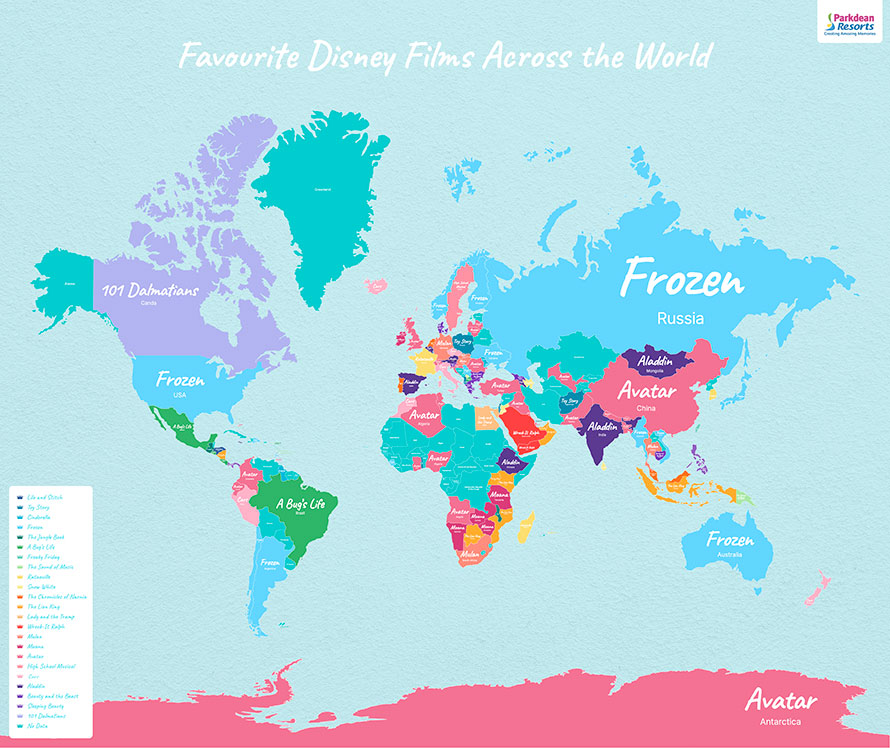 With nearly 2 million annual searches, Frozen is officially named the world’s favourite Disney film. The movie series, originally released in 2013, is already a classic when it comes to its diehard fanbase. Frozen achieved significant box office success, grossing £960 million. Its sequel, Frozen 2, has been named as the highest-grossing animated film of all time, raking in £1 billion in box office sales.

Looking at which countries are the biggest Frozen fanatics, the U.S rules all with a whopping 1.3 million searches!

Sci-fi fantasy Avatar takes the second spot, racking up 1.8 million searches annually worldwide. To this day, Avatar (2009) is the second highest-grossing film of all time, with Avengers Endgame only knocking it off the top spot 10 years later in 2019.

According to the data, Canada is the biggest lover of Avatar, with a whopping 665 thousand searches per year. Next up are the United States and the UK, who are almost neck and neck when it comes to the number of searches. 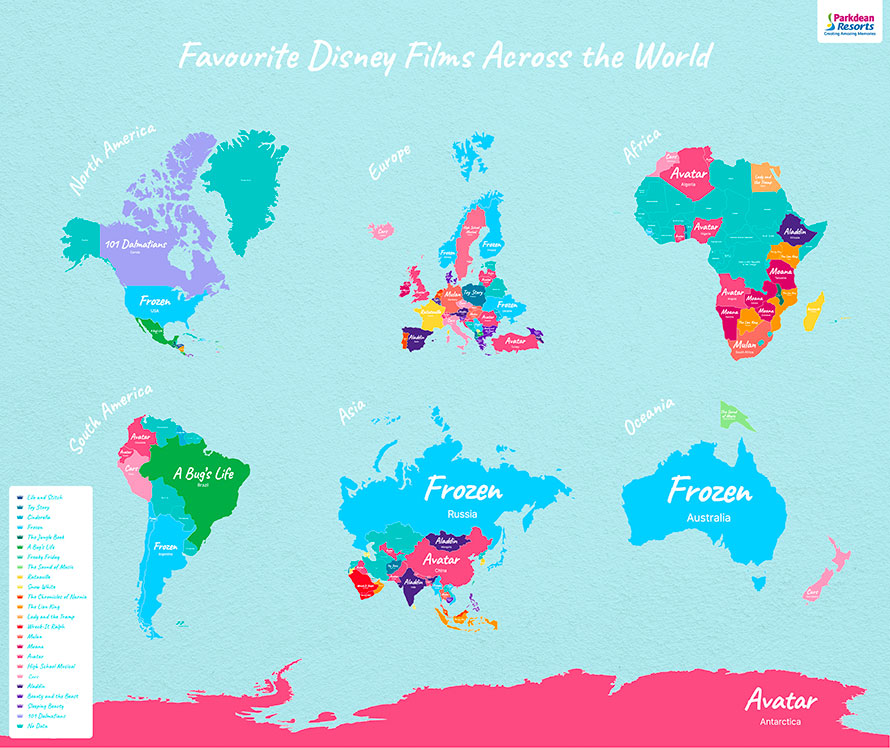 Europe’s most searched for films across each country revealed! 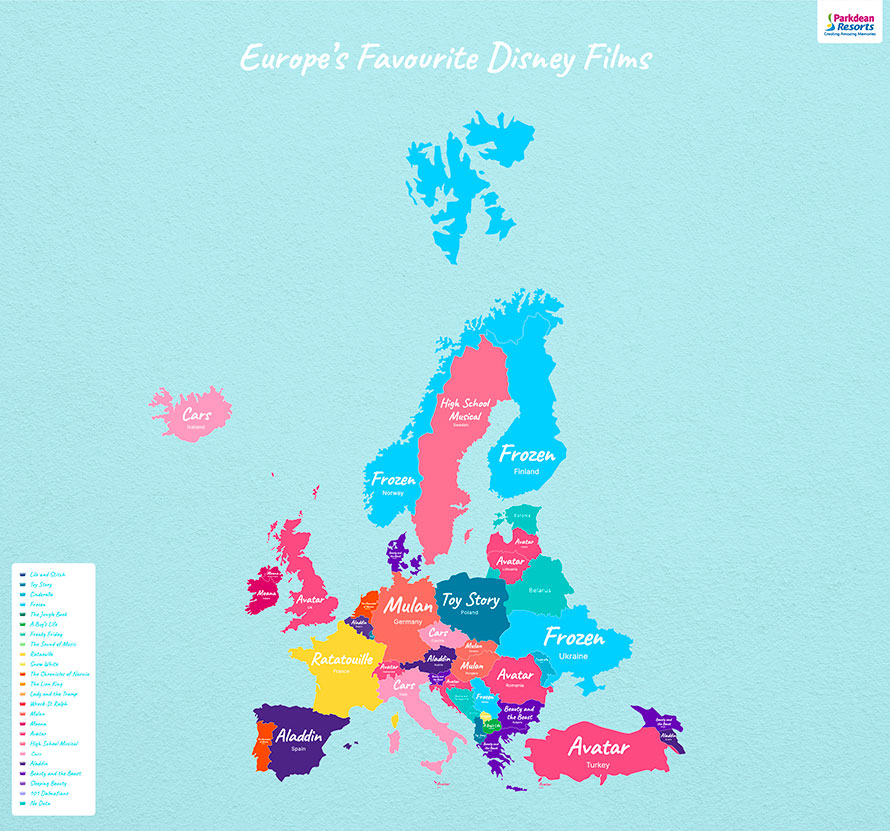 Across Europe, countries differed on their favourite Disney film. According to the research, Avatar is the most searched for Disney film in the UK with 365 thousand searches. In Ireland, Moana is named as their absolute favourite to stream with 185 thousand whilst Denmark favours Beauty and the Beast and Sweden loves the Disney Channel classic, High School Musical.

And we don’t just mean the food. Ratatouille is all about a little rodent with big dreams of becoming a chef in Paris, and with over 1.5 thousand searches for it a year, it’s clearly a dream the French people support.

Spain are lovers of Aladdin

With over 9,000 searches annually, Spain loves a true Disney classic. They also loved a more modern outing in Cars, which tied with the magic carpet riding hero in first place.

According to the research, the UK are head over heels for Avatar, High School Musical and Lady and the Tramp - showing a love of Disney spread evenly throughout the ages.

Africa is a continent of Mulan lovers 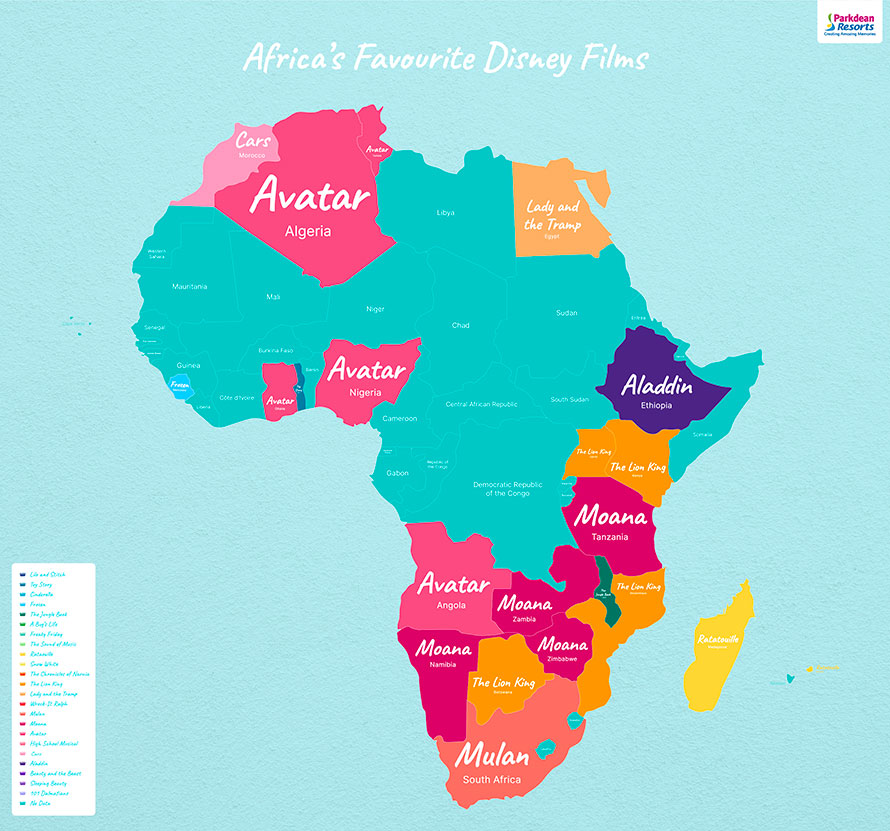 Disney’s retelling of Chinese folk tale Mulan is Africa’s favourite, with titles such as Avatar and the Lion King also popular.

When it came to who loves Mulan the most, South Africa is leading the way, with over 8 thousand searches. Next for the top spot is the 2016 animated film with Hawaiian heritage, Moana. 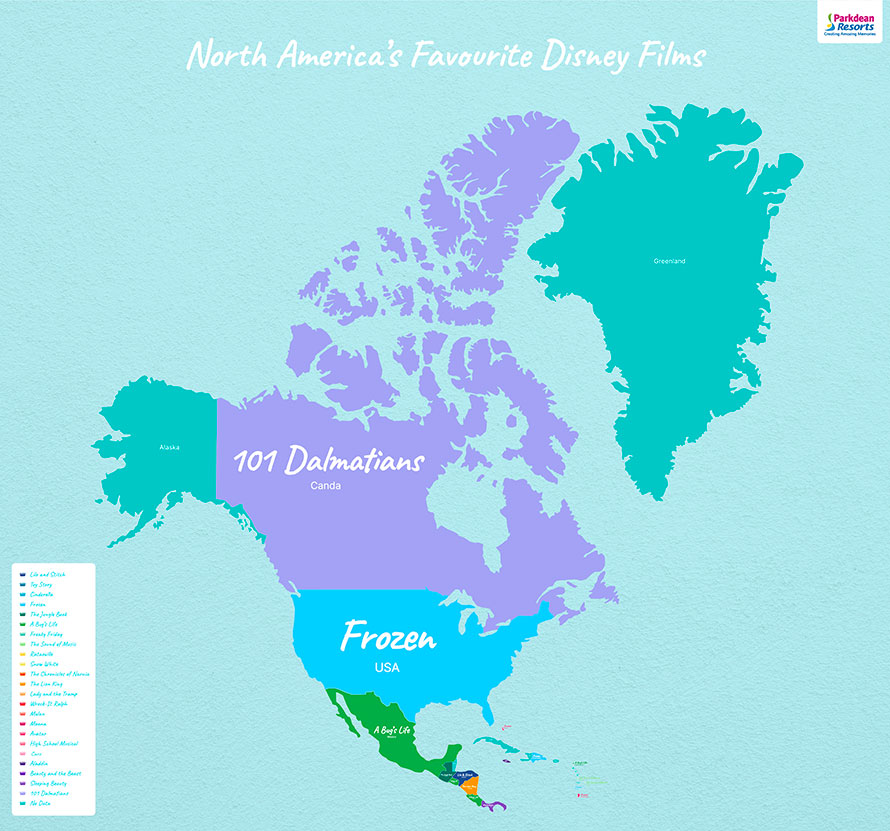 With two clear favourites, North America is torn between 101 Dalmatians in Canada and Frozen in the U.S. But the continent definitely agrees on Avatar, with the animated film being hugely popular across both countries. 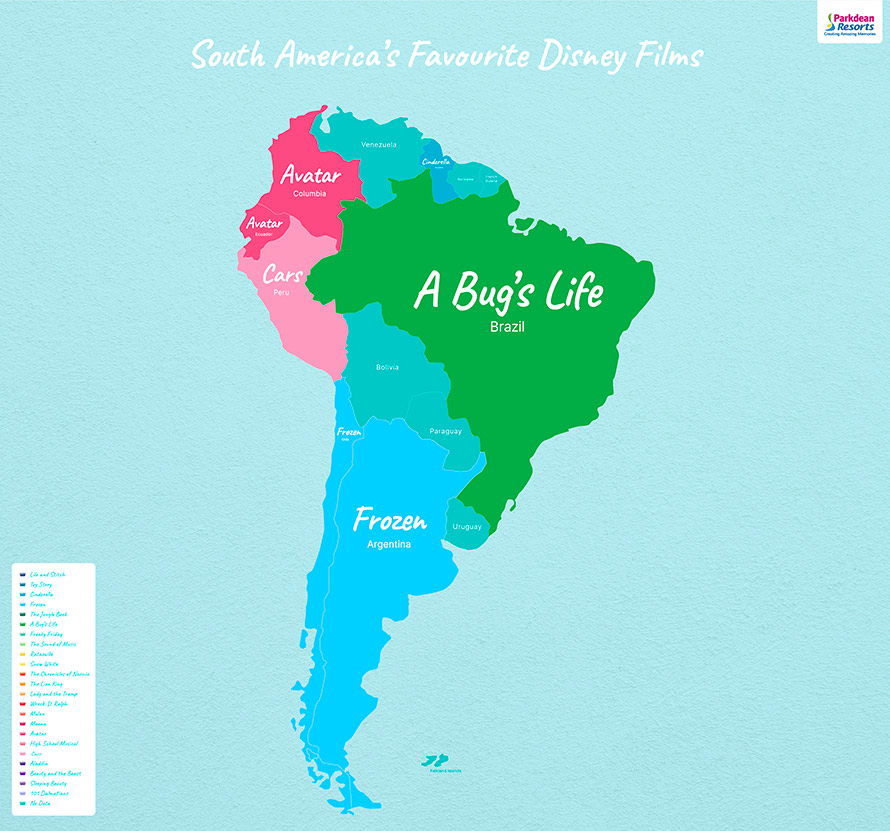 1998 Disney classic A Bug’s Life is South America’s absolute favourite. The continent is almost torn between that and Frozen, closely followed by enchanting classics such as Chronicles of Narnia and, of course, Avatar.

Asia is all about Frozen 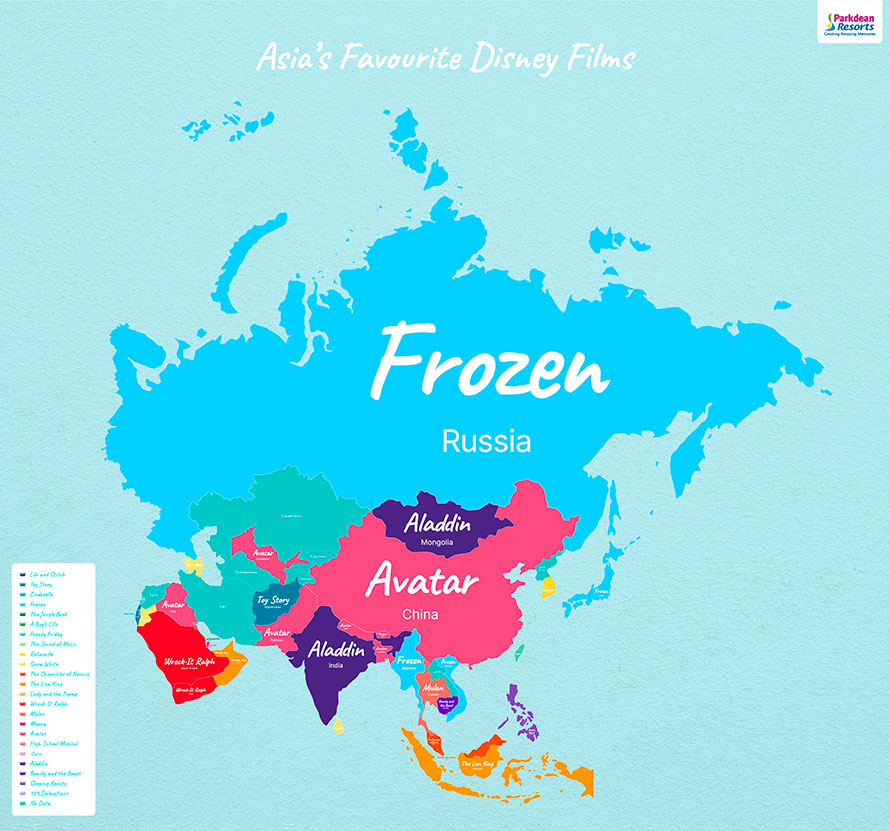 Asia loves singing along as much as the rest of us, with Frozen as their overall favourite, particularly in Russia. Avatar hits the top spot in China, whereas India are huge fans of Aladdin.

Oceania has one firm favourite 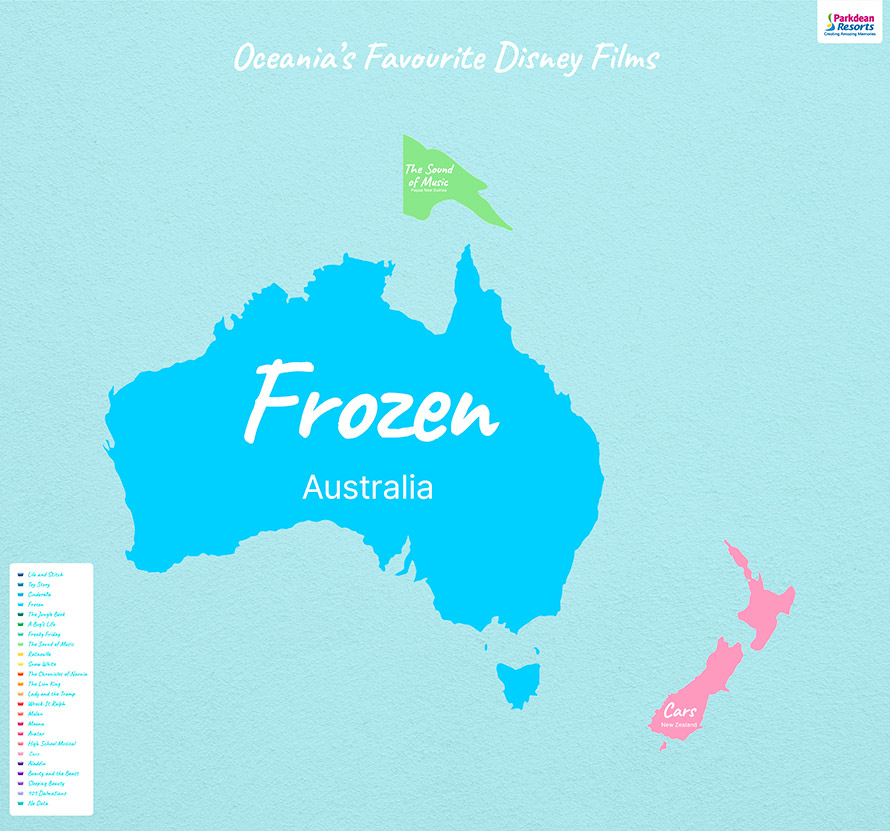 When it comes to the other side of the pond, Australia are huge fans of Frozen, which makes up the majority of searches here. The continent also loves titles such as Cars and The Sound of Music.

Looking for more fun things to do during the COVID-19 lockdown? Check out our list of the best virtual tours you can do from the comfort of your own home, letting you explore the world from your sofa.