Famous UK Landmarks as if they were Built in 2021

Throughout history, landmarks have been built to commemorate significant events, to establish a location or to play a practical everyday role. But what would happen if some of the most famous landmarks in the UK had been built in 2021?

Here at Parkdean Resorts, we’re very proud to be just around the corner from some of the country’s most iconic landmarks - whether it’s The Angel of the North in Newcastle, Fountains Abbey in Yorkshire or Land’s End in Cornwall - and we love hearing our visitors’ stories from their day trips to see them!

Still, it’s interesting to imagine what some of these landmarks would look like if they were built today, so we’ve chosen a few of our favourites and reworked them as 2021 icons.

Big Ben as a home for nature 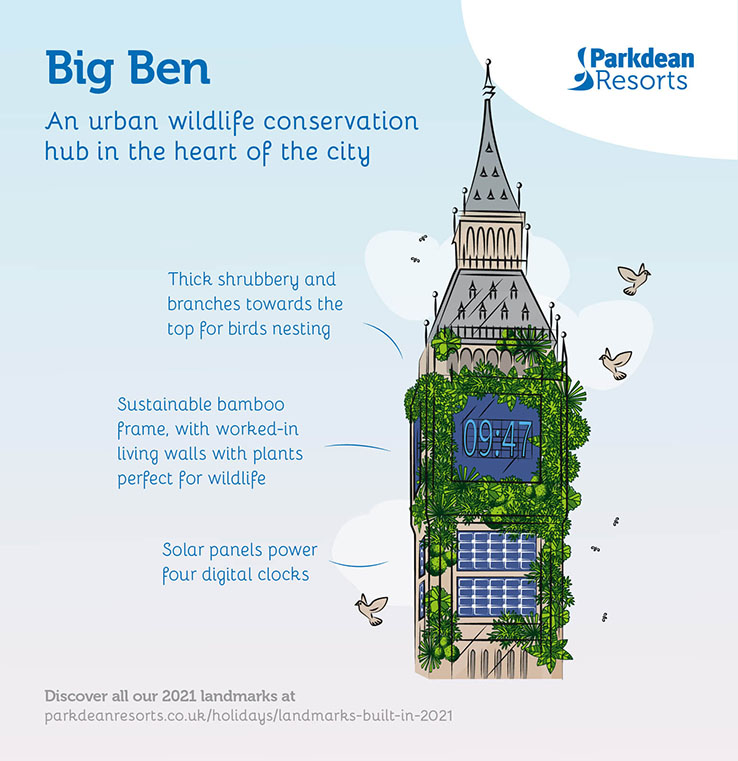 Big Ben was originally built in the heart of London as the most accurate clock in the country, but what if instead it became a home for wildlife, bringing some much needed conservation and green space to the capital?

In our version, we’ve reimagined Big Ben to become a home for urban wildlife featuring: living walls which are perfect up top for birds to nest, seasonal flowers for bees, butterflies and other insects, a covering of hedges and berry bushes to provide some much-needed sustenance in colder months for birds and small mammals.

This reimagining sees Big Ben made of bamboo, which is an incredibly strong and durable material both easy to manipulate and shape, and is also earthquake resistant.

This update would also lose the analogue clock face, in favour of a digital version powered by solar panels around the top of the landmark - an eco-solution to modernise the design.

The London Eye as the dream remote working space

Working life has seen some significant changes in the last year, the biggest of which is that working from home has become an essential part of Brits’ jobs. Originally built to celebrate the millennium, The London Eye has been giving tourists and Londonders alike a bird’s-eye view of the city - but what if it could provide inspiring views for remote workers?

Here, we’ve imagined each capsule as a remote office space, complete with a desk, a water cooler and even office plants, which would be free for people who don’t have access to a working space in their homes, or who need a break from their spare bedroom view!

This London Eye-solation space is complete with everything you need for a day's work, with the wheel itself functioning as a huge Wi-Fi hub to not only boost its workers internet speed, but also provide connection for those within a square mile radius!

Stonehenge as a pioneering music venue 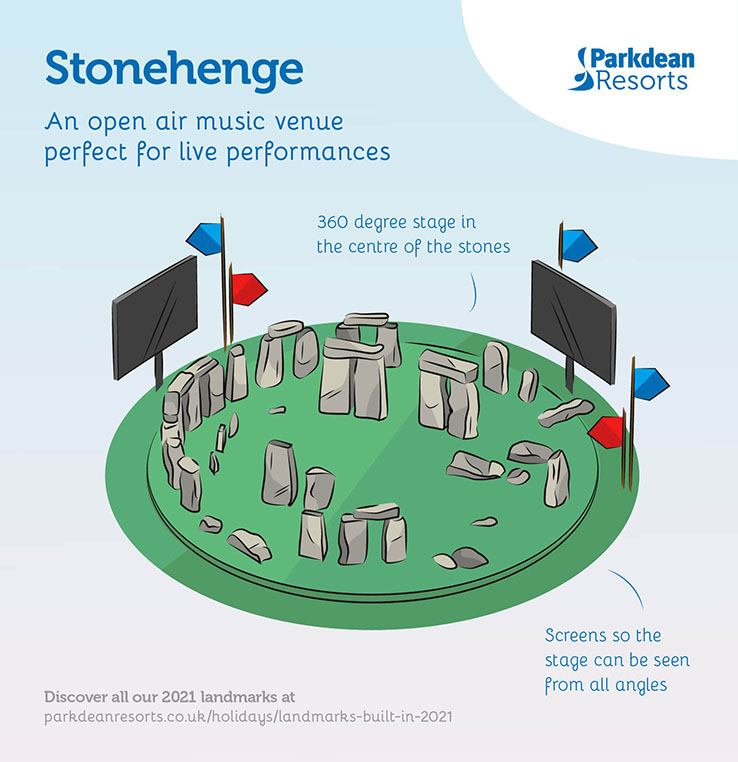 Since it was built, Stonehenge has sparked many theories regarding its origins and purpose - but what would its purpose be in 2021?

With live music events being so sorely missed over the past year, we wanted to reimagine Stonehenge as one of the world’s most high-tech open-air music venues. Less than 40 miles away from the UK’s biggest music festival, Glastonbury, Stonehenge’s ethereal atmosphere and shape make it the perfect venue for a 360° concert.

A full-circle stage in the centre surrounded by a standing zone and banked seating further back, this immersive experience would provide audiences with an engaging and entertaining evening - with screens surrounding the area so you never miss a second of the action when you leave to grab a drink! 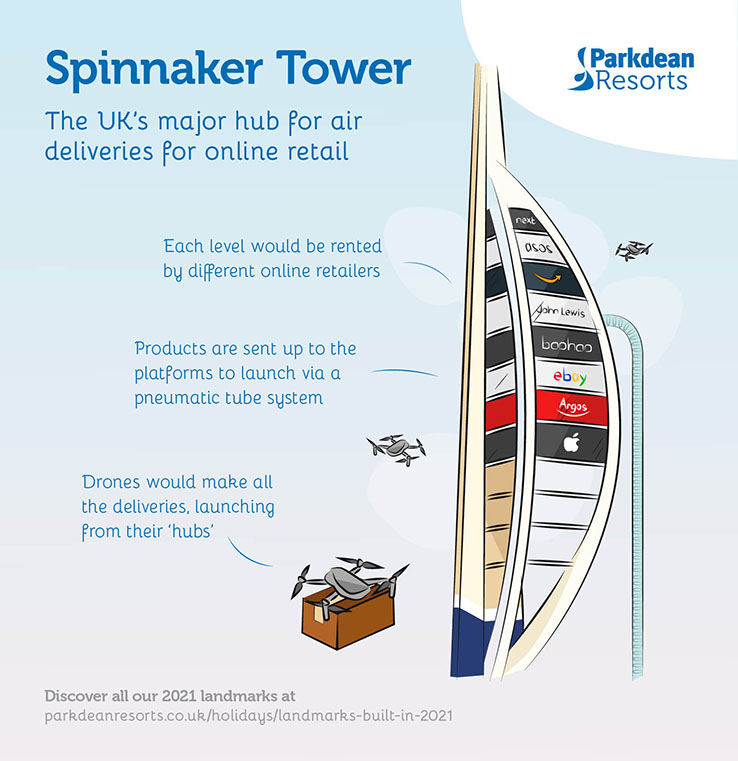 Spinnaker Tower in Portsmouth was built in 2005 as a viewing tower for visitors to look out onto the landscape, but what if it was used to solve the current demands facing the distribution industry?

Over the last year with lockdown and shops being closed, online ordering has soared dramatically and pressure has been mounting for parcels to be delivered in numbers never seen before, so we’ve imagined this observation tower as the distribution centre of the future!

With an appearance not dissimilar to something you might see in The Jetsons, this tower would operate a drone system for deliveries with different key online retailers occupying different platforms. All products would be stored in underground warehouses and delivered to the distribution platform via a pneumatic tube system, and the use of drones to deliver would reduce carbon emissions from lorries and vans! 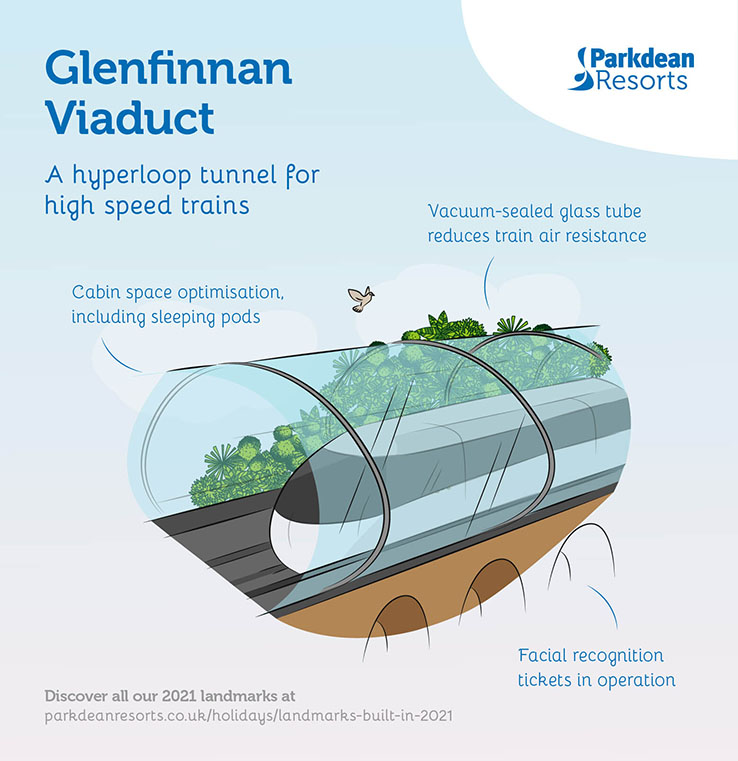 Possibly the most recognisable bridge in the UK thanks to its appearance in the Harry Potter films, the Glenfinnan Viaduct opened in the early 1900s and has seen countless railway journeys pass over it.

Keeping to its original locomotive intentions, we’ve reimagined the viaduct as a Hyperloop bridge inspired by Elon Musk’s latest innovation. This vacuum-sealed tube reduces air resistance acting on people-carrying pods, and Glenfinnan Viaduct would be a tunnel for one of these trains.

Featuring transparent walls so passengers can experience breathtaking views, and those visiting can see the trains passing, we imagine the railway of the future offering facial recognition ticketing systems and solar panels across the top of the tunnel to boost its eco-friendliness. 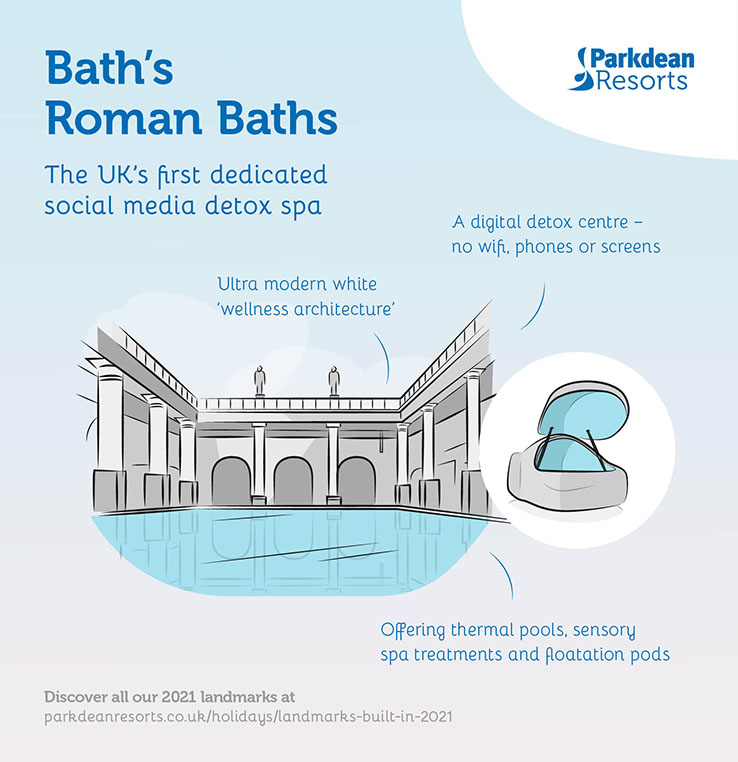 Dating back to the 1800s, the Roman Baths in Bath are a must-visit for tourists wanting to soak up a piece of history, but can we modernise this historic site's original use for 2021?

We’d present guests with a digital detox spa to completely remove them from social media and screen-time with a series of regression-inducing treatments. Featuring ultra-modern white ‘wellness architecture’, with soothing colours and gentle lighting throughout, the detox spa will be responsive to its user by adjusting air, light and sound to suit their needs.

Transforming the baths into thermal pools and floatation pods to offer a range of sensory treatments, this will be a screen-free zone for those who need to take a step back from the world.

Wollaton Hall as an immersive cinema 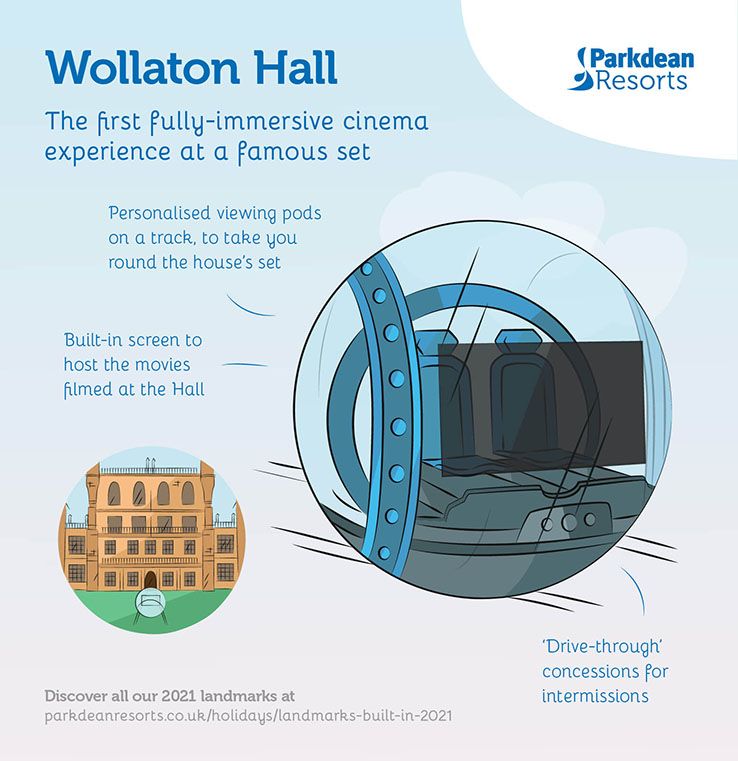 Built during the Elizabethan era, not only is Wollaton Hall steeped in rich history but it has also been used as a film set for plenty of blockbuster titles. With this in mind, its huge spaces and cinematic history make it the perfect venue for a fully immersive cinema experience.

Featuring a house-long track system, customers would board individual pods to allow for each user to watch their own film simultaneously. The pods - which are similar to the gyrospheres from Jurassic World - would have rumble-motion technology to suit the action happening on screen so riders can feel like they’re part of the film, with surround sound inside each pod.

Also featured would be ‘drive-through’ concession stands for intermission, allowing you to top up your drink, fill your popcorn and grab a pick ‘n’ mix as you’re passing.

Prince of Wales Bridge powering the whole of Newport 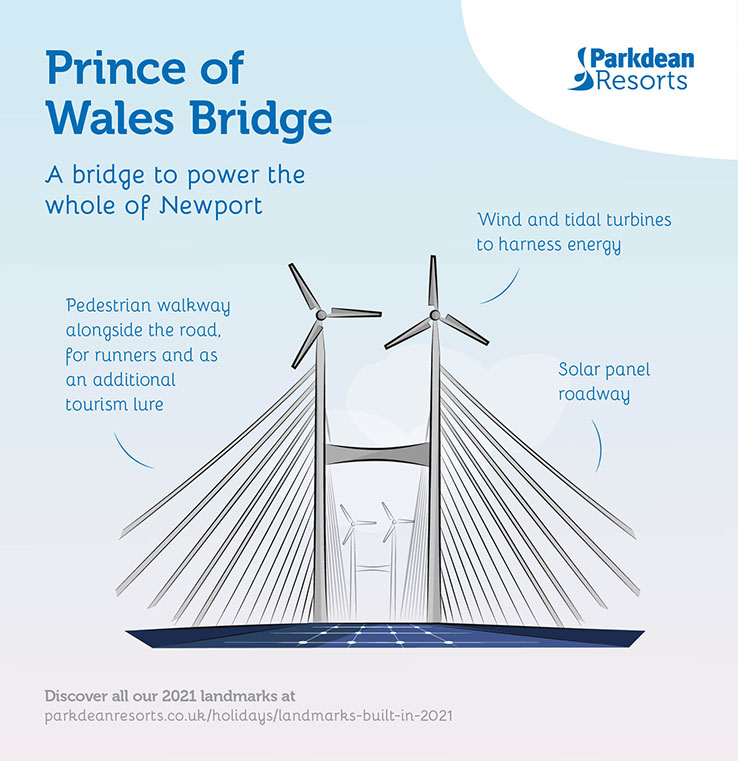 Built to allow six lanes of traffic to pass between England and Wales and reduce journey times significantly, the Prince of Wales Bridge has been carrying vehicles since 1996, but what if it could also be used to power the whole of Newport?

We imagine that having wind turbines, solar panels and tidal turbines included in the design would provide significant power to the town and reduce greenhouse gas emissions. This, combined with a pedestrian walkway running parallel to the road and added greenery to boost seabird life, would increase its eco-friendly opportunities.

Creating green space within the bridge would also boost tourism as it would offer incredible views and an alternate walking and running route for locals.

We might not be experts when it comes to the designs of iconic landmarks, but we do know a few things about how to provide a fantastic UK holiday. We are so lucky to be surrounded by incredible man-made landmarks, breathtaking natural beauty and - of course - some of the UK’s most-loved attractions.

So if you want to make a start on visiting some famous UK landmarks, we have holiday parks near the Prince of Wales Bridge, Glenfinnan Viaduct, Spinnaker Tower and Stonehenge.