With Great British Bake Off mania in full swing, what better time to celebrate the UK’s culinary prowess with a tour of our finest and most famous traditional baked goods? Whether you’re looking for some regional inspiration for your next recipe or just fancy a sweet treat, our guide to Britain’s best-known baked goods (and where to try them) is sure to get your tummy rumbling.

Is your favourite missing from our list? We’d love to hear your recommendations on our Facebook page.

While gingerbread is by no means a British invention, it’s a sure family favourite across the UK. While the origins of British gingerbread are hotly debated, Market Drayton in Shropshire – just a stone’s throw from the Welsh border – is widely regarded as the historic hotbed of gingerbread in the UK. Records show gingerbread being made here as early as 1793, and in the early 20th century the town was home to no less than 4 bakeries in fierce competition.

Gingerbread recipes vary wildly, with various combinations of ginger and spices – including cloves, nutmeg and cinnamon - being kept a closely guarded secret by discerning bakers. In the UK, gingerbread can range from classic crunchy biscuits to soft cake-like consistencies.

While gingerbread may have a home in Shropshire, our favourite lies a little further north in the charming lakeside town of Grasmere, Cumbria. Sarah Nelson’s Grasmere Gingerbread is widely regarded as the world’s best and is exported globally to meet the demand for its unique spicy-sweet flavour and deliciously chewy texture.

Today, you can visit The Grasmere Gingerbread Shop to stock up on the famous gingerbread as well as other ginger flavoured treats – just 20 minutes from White Cross Bay Holiday Park. And if you’re feeling the need to burn off those biscuits, the nearby walk to Alcock Tarn is just the ticket. 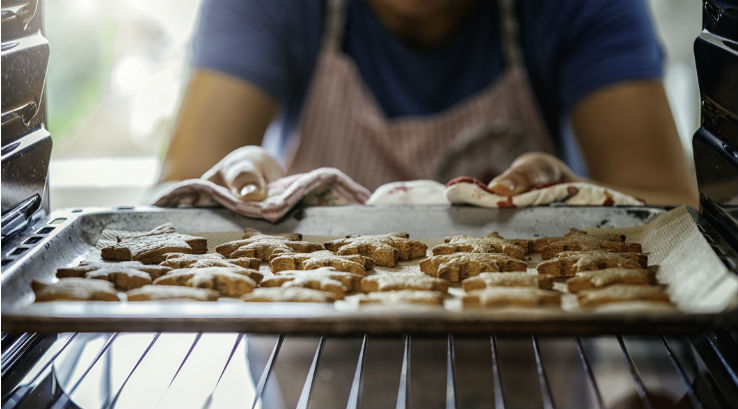 With its origins in medieval times, shortbread has long been synonymous with Scotland and is one of its most famous exports. Once a delicacy served only on special occasions - such as Christmas, New Year and weddings - Scottish shortbread is now widely regarded as the king of the biscuits.

Its simple recipe calls for a hefty dose of sugar and butter combined with flour and baked at a low temperature until pale and firm. Shortbread’s buttery rich flavour and crumbly texture makes it a teatime winner across the UK.

Most self-respecting gift shops in Scotland will stock a range of shortbreads to pick up, however, our favourite has to be Dean’s. First concocted in Helen Dean’s kitchen at her home in Aberdeenshire, Dean’s shortbread has grown to become a household name in Scotland and beyond.

Today, Dean’s remains a family run business and if you’re a shortbread devotee, you’ll want to head straight to the source. In the town of Huntly you’ll find Dean’s Gift Shop and Café Bistro, providing the perfect opportunity to break up your journey on the way to Nairn Lochloy Holiday Park and stock up on Dean’s signature melt in your mouth shortbreads – still using Helen Dean’s winning original recipe. 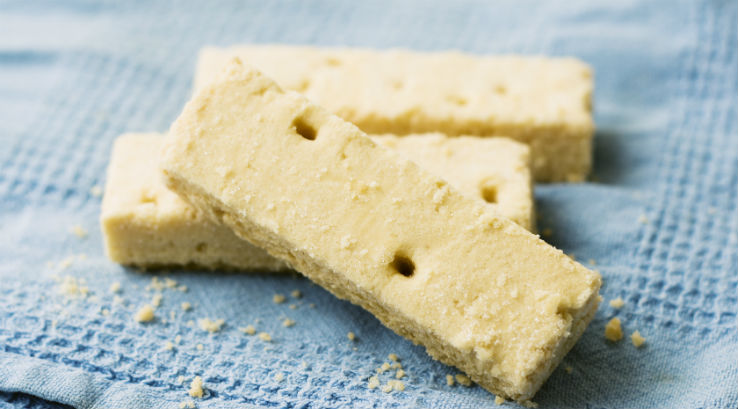 An oldie but a goodie, the humble Eccles cake hails from a town of the same name, sitting on the outskirts of Manchester’s vibrant city centre. Historically part of Lancashire, many Eccles cakes still bear the Lancashire name on their packaging.

More of a pastry, the Eccles cake consists of a sugared golden puff pastry shell, filled with a mouth-watering mix of dried currants, butter and sugar. It’s this tasty combination which has resulted in the Eccles cake being one of the UK’s most famous traditional sweet treats, found in supermarkets across the UK.

While the origins of the first Eccles cake is up for debate, Real Lancashire Eccles Cakes are widely regarded as the some of the best around and are easy to come by in corner shops and cafes across Lancashire and Greater Manchester. With the factory a mere 5 miles from their birthplace, Lancashire Eccles Cakes manage to turn out a staggering 600,000 cakes a week – all made by hand! If you’re holidaying in Lancashire, a cup of tea with an Eccles cake is the perfect introduction to the region. 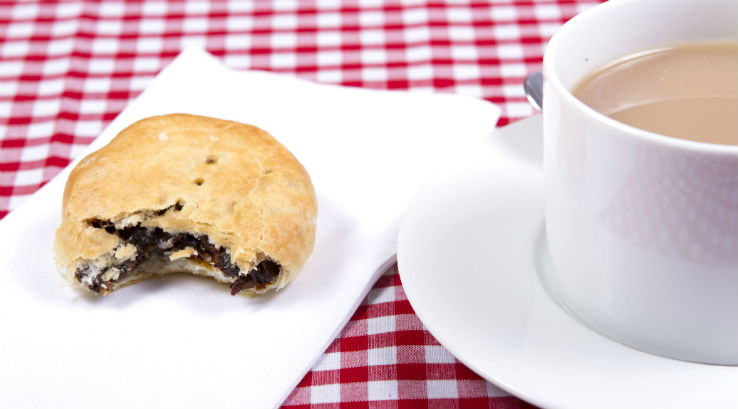 No list of Britain’s best known sweet treats would be complete without the British institution that is cream tea. There’s little more comforting than a steaming pot of freshly brewed tea served with warm crumbly scones, sweet jam and rich clotted cream. Despite only one ingredient hailing from the South West, cream tea has become synonymous with Cornwall and Devon thanks to its famous dairy produce.

Clotted cream is traditionally made by straining milk and leaving it to separate in a shallow pan. Once the cream has risen to the surface, it’s heated before being allowed to cool – where the rich clots of cream can be skimmed off the surface.

If you’re looking for the ultimate cream tea experience you’ll be spoilt for choice in Devon, with countless tea houses and cafes offering their own take on the local fare. If you’re staying at Ruda Holiday Park on the North Devon Coast, a trip to Nelly May’s Parlour is a must – just 5 miles away in nearby Ilfracombe.

Having won countless awards, this charming traditional tea room is consistently recommended for offering one of the best cream teas in the region. Using organic flour and free range eggs, Nelly May’s bake their scones on the premises and even make their own jam – making the experience all the more authentic. 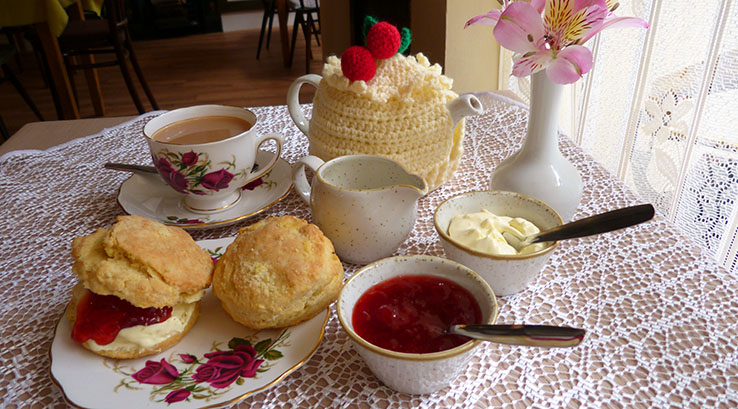 A favourite teatime treat across Wales, Welsh cakes stem from the traditional method of cooking on a hot cast iron griddle – locally known as a bakestone. Originally used to create flatbreads - sugar, butter and dried fruit found their way into the recipe over the years and the Welsh cake was born. The trick to a good Welsh cake is a hot griddle and an attentive eye – allowing them to brown on both sides while staying moist in the middle.

While the Welsh cake is a particularly popular snack in South Wales, you can find regional variations of the recipe across Wales and beyond. Typically eaten plain, they’re also served as a ‘Jam Split’ in South Wales, cut in half and smothered in jam – delicious!

If you’re heading out to Cardiff for the day while staying at Trecco Bay Holiday Park, a trip to Fabulous Welshcakes is a must. Pick up a warm bag of freshly made Welsh cakes from their shops on Mermaid Quay and in the Castle Arcade. It’s the perfect way to fuel up before exploring the sights and sounds of Cardiff. 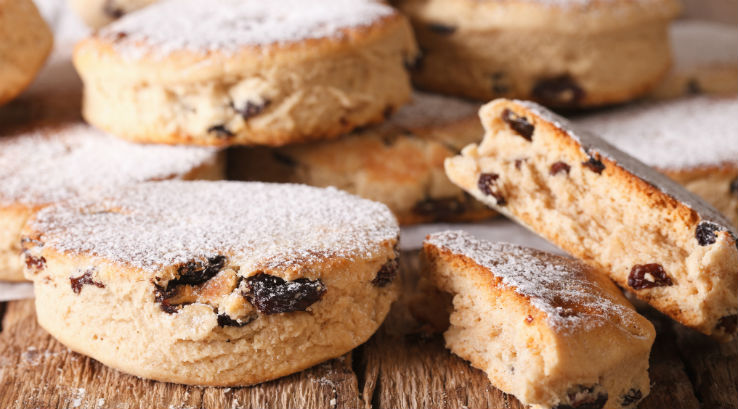 Fancy something savoury? Check out our blog on Britain’s best regional dishes.