4 Fantastic Walks that End in the Pub

Nothing beats the Great British tradition of a country walk followed by your favourite tipple and a pub lunch. Whether it’s a refreshing IPA, a crisp pint of cider or a hearty Sunday roast you’re craving, walking to a country pub is the perfect way to spend a sunny afternoon.

Today we’re bringing you a handpicked selection of our favourite pub walks, offering spectacular views, tasty ales and delicious food. What more could you ask for?

Just 45 minutes north of Cresswell Towers Holiday Park, you’ll find the spectacular stretch of Northumberland coastline between Craster and Low Newton. With both towns accessible by car, and both home to fantastic pubs, you can start your walk at either end.

After exploring the charming harbour village of Craster, head north along the coastal cliff tops towards the spectacular ruins of Dunstanburgh Castle. Descend onto the fine white sands of Embleton Bay, continuing north along the beach. At low tide, spectacular rock formations are revealed - with hundreds of rock pools teeming with local wildlife – and if you keep your eyes on the waves, you might even spot one of the local resident seals popping its head above the waterline. At the foot of the bay’s grassy sand dunes, you’ll also see the remains of historic concrete bunkers, built during World War II to protect the beaches from invasion.

The beach comes to an end at Low Newton, home to The Ship Inn - widely regarded as one of the best pubs in the region - serving up tasty food and a wide range of beers, all concocted on-site at the pub’s very own brewery.

Heading the other direction? Follow the route in reverse, stopping off at Craster before heading back to Low Newton. You’ll find plenty on offer around Craster Harbour - a visit to the local smokehouse is a must, famous for its smoked kipper. The Jolly Fisherman Pub in Craster is also something of an institution, serving up bistro classics in a cosy traditional pub setting. Don’t forget to head out to the beer garden to enjoy spectacular views over the North Sea.

If you’re looking for a walk suitable for little ones (or you’re just feeling lazy!) this pleasant circular route offers rewarding views of the Cornish Coast – without the need to break out the walking boots. Better yet, it starts at Sea Acres Holiday Park – meaning you can leave the car outside your caravan.

Exit the park onto the road and turn right, heading east towards Kennack Sands Beach. Look for colourful pebbles amongst the sand, paddle in the shallows or simply sit back and watch the surfers catching waves.

When you’re ready to move on, just behind the beach, you’ll find the South West Coast Path running through the Lizard National Nature Reserve. Take the footpath on your left, heading inland to the woods of Gwendreath Valley.

After a short walk, you’ll come to a road outside another holiday park, turn left and follow the marked path skirting around the side of the park. Follow this south until you reach The Potters Bar pub, where the kids can grab a tasty pizza while you enjoy some traditional fish and chips and some Cornish cider.

Just under an hour away from Ty Mawr Holiday Park, the beautiful Welsh island of Anglesey is well worth a visit – with its well-marked coastal path offering plenty of walking opportunities.

For the perfect pub walk, park up in the picturesque fishing village of Moelfre. From the car park next to the shingle beach, head south until you reach the signposted coastal path on your left. Follow the path south to the sandy beach of Traeth Bychan – the perfect place to stop for a paddle in the gentle shallows.

After you’ve dried off, continue along the cliff tops on the coastal path, passing by the village of Benllech – until you reach the spectacular sprawling sands of Red Wharf Bay and the Ship Inn pub. With hearty pub classics served up alongside real ales, fine wines and 48 varieties of whisky, you’ll be spoilt for choice!

You’ll no doubt be ready for a rest after your 5 mile walk, so hop on the number 62 bus from the bus stop up the road - which will take you back to the centre of Moelfre.

With the iconic White Cliffs of Dover, the English Channel and even the coast of France visible, this pub walk is truly one of the most spectacular in the UK.

Starting at the National Trust car park at the White Cliffs of Dover, just over 5 minutes’ drive from St Margaret’s Bay Holiday Park, take in the spectacular views over the Port of Dover and Dover Castle. Here you’ll be able to see Dover’s busy ferry terminal in action – and, if you don’t fancy walking, it’s the perfect spot to park up and watch the world go by.

To follow the trail, head east out of the car park until you reach the start of the cliffside path, which gives way to spectacular views over Dover’s iconic white cliffs. From here, you’ll also be rewarded with views of France – just 20 miles away – visible across the Channel on a clear day. Stick to the coastal path until you reach South Foreland Lighthouse. Here, head up to the lighthouse and turn right, continuing along the cliff top path until you reach Beach Road. Take a right turn, following the road downhill, keeping right until the road opens out into a car park overlooking St Margaret’s Bay – where you’ll find the delightful Coastguard Pub.

‘Britain’s nearest pub to France’ enjoys wonderful seaside views over the English Channel and beyond. Serving up pub grub classics and a wide selection of beers, it’s the perfect place to recharge before heading back up along the cliffs. 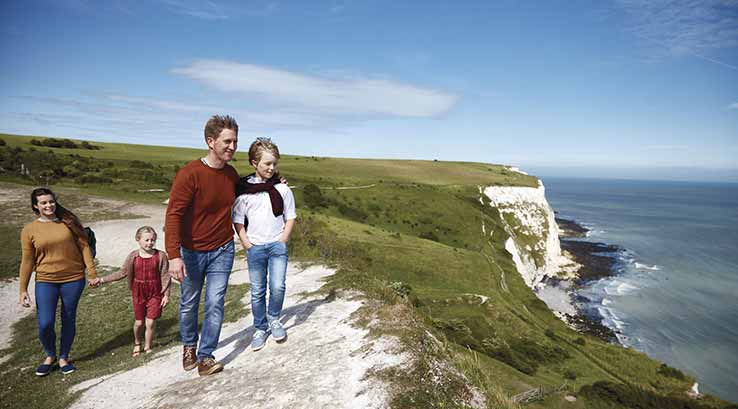 With 73 holiday parks to choose from in fantastic coastal and countryside locations, you’ll be spoilt for choice when it comes to walking opportunities on a Parkdean Resorts break.

Have you got a favourite pub walk? Tell us all about it on our Facebook page, we’d love to share your recommendations.