Don’t miss out on these meat-free delicacies

With veganism on the up in the UK, many cafés and restaurants have developed their plant-based offering to please the meat-free audience. We’ve partnered up with vegan food & lifestyle blog, Howay the Herbivores, to bring you the very best vegan-versions of these classic British dishes, so you don’t have to miss out on your favourite meals when dodging meat, dairy and eggs.

There are now an estimated 540,000 vegans in Great Britain, according to the latest research from the Vegan Society. The growing trend involves cutting out animal products like meat, fish, dairy, eggs and honey from the diet, as well as avoiding day-to-day products that have been tested on animals.

The ethical journey of veganism has become increasingly accessible in recent years, with major UK supermarkets introducing extensive plant-based dishes to their shelves. Meanwhile traditionally meat and fish-focused chains, such as Nando’s and Yo Sushi, have added an array of vegan dishes to their menus.

Even smaller outlets have started to adapt to the growing hunger for meat-free dishes, including the ‘veganisation’ of several creative local and national dishes. From traditional Cornish pasties to a slap-up full English breakfast, we’ve hunted down the very best vegan-friendly twists on British classics from amazing small businesses across the country. Take a look at the list below and let us know which you would choose on Parkdean Resorts’ Facebook or Twitter!

Think Cornwall? Think pasty! Dating back to the early 1860s, this pastry-based delicacy is typically filled with minced meat and potatoes, shaped like a “D” and crimped on the rounded edge. In days before packed lunches and good vans, the Cornish pasty would keep miners full during a hard day’s work.

Considering this dish comprises of pastry, be it shortcrust, rough puff or puff, as well as minced meat, you’d be forgiven for thinking the Cornish pasty was off-limits to vegans.  However, The Cornish Vegan Pasty Company is challenging that with their home-grown small business, selling fresh and frozen vegan Cornish pasties to stockists across the region.

Made using a whole-wheat flour pastry and stuffed with seitan, a plant-based meat substitute made from vital wheat gluten, and seasoned potato, turnip and onion, these vegan-friendly Cornish pasties are both delicious and filling. The Cornish Vegan Pasty Company produces a wide range of traditional pasties with modern twists, including cheese, onion and mountain chilli!

Visitors to Newquay Holiday Park will be pleased to hear they can taste these delicious gems for themselves at Sprout Health Foods, which sits seconds from the town’s famous Fistral Beach. If you like these local treats as much as I do, then why not pick up a couple of frozen pasties to take home and share with the family? 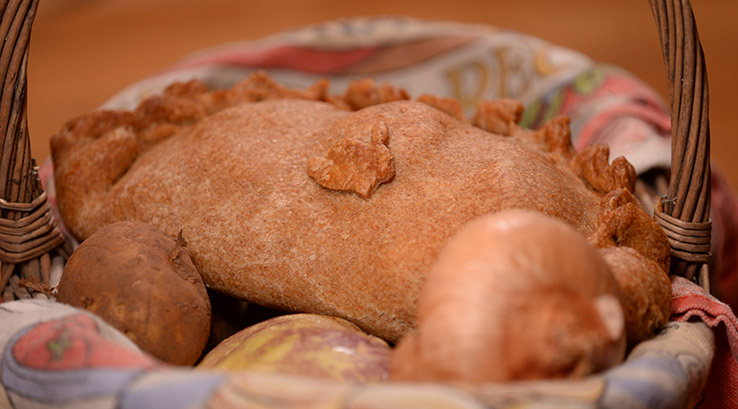 The next delicacy is a British seaside favourite. When taking the steps to give up meat and fish products, you may feel as though you have to give up your childhood favourites – I know I did! However, as the plant-based food market grows, that’s no longer the case.

As veganism grows in popularity, as do the food choices – and it’s not just the bigger chains that are catching on. If you’re staying at Yorkshire seaside destination, Cayton Bay, you don’t have to miss out on crispy batter and vinegar-soaked chips by the sea. Scarborough family-run fish ‘n’ chip shop, Capplemans, boasts an extensive vegan-friendly menu including Fishless Fish Cake & Chips, Spicy Bean Burger & Chips, Sausage and Chips and even a Mushy Pea Bomb, which is a ball of mushy peas deep fried in batter!

This seaside spot also has a great gluten free menu, meaning no one has to miss out on this traditional seaside favourite. 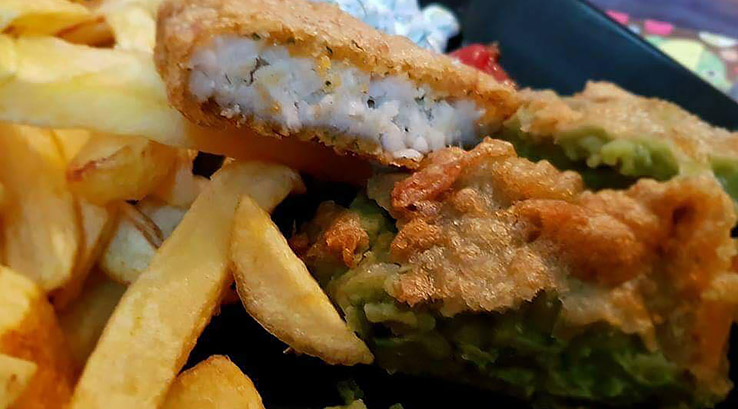 We’re taking a trip over the border for the next classic dish on our list. Traditionally comprising sheep’s pluck (heart, liver and lungs), minced with mixed root vegetable and boiled in a stomach… it doesn’t get any less vegan friendly than haggis!

Unbelievably, vegetarian and vegan restaurant Hendersons of Edinburgh has embraced this 1,500 year-old delicacy and transformed it into an organic, plant-based treat. Made from a mix of pulses, beans, oats, onions and mushrooms, Hendersons’ famous vegan haggis originally hit the menu for Burn’s Night. Served alongside root mash and sautéed greens, the vegan haggis became a regular feature on the restaurant’s menu due to high popularity.

Whether you’re heading to the Scottish capital for an epic Burn’s Night celebration or just for a city break, you must head to Hendersons to try their fully organic and locally sourced vegan-friendly menu. 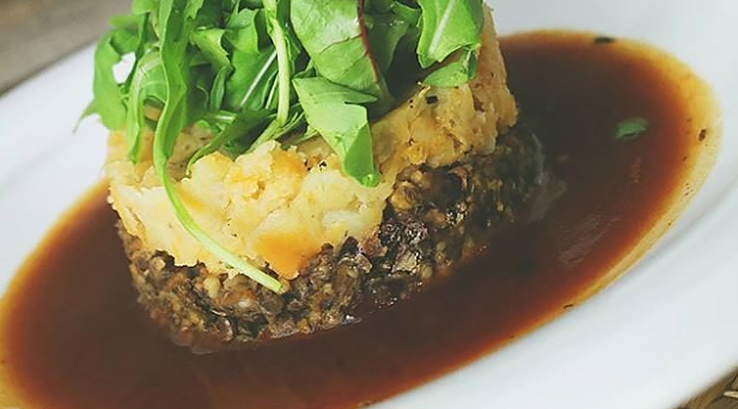 If you’re anything like me, you may not even realise that asparagus is a traditional British crop. In fact, every year the Isle of Wight welcomes the first asparagus harvest in the UK. Of course, the vegetable can be served in countless ways – both vegan and otherwise, however quiche is a common dish produced across the Isle as the spear-headed greens make a great, flavoursome base for this classic pastry dish.

The Farm Shop and No.8 Café in Bembridge is an ideal spot to try delicious vegan alternatives of asparagus-based dishes. The shop even sells bundles of locally grown asparagus, so if you’re holidaying on the Isle of Wight, why not pick up some of the Isle’s famous crop to try at home? You could knock-up this scrumptious recipe for vegan asparagus risotto.

Image courtesy of The Farm Shop and No.8 Café

A British classic, afternoon tea is another amazing treat that you may think you’ll never have again after choosing the vegan lifestyle. Also known as ‘high tea’, this meal is typically served between 3.30pm and 5pm, and was once reserved for the wealthy social classes of the 19th Century.  Although afternoon tea is now served across the country, the fare is particularly popular in Devon and Cornwall, where it is known as cream team and comprises scones, clotted cream, jam and plenty of tea.

The logistics of cream tea are highly debated, with Devonians topping their scones with clotted cream followed by strawberry jam. Meanwhile, the Cornish add jam to their scone before coating with clotted cream. In other parts of the country, afternoon tea is served with sandwiches and even pastries! Whether you’re team jam-first or team cream-first, there are plenty of spots across the south west where you can tuck into delicate sandwiches, luxurious cakes and crumbly scones – many of which are suitable for vegans.

One of our favourite spots for vegan-friendly afternoon tea is The Hidden Treasure Tea Room in Exeter, which is not only a perfect place to re-fuel after a hard day exploring the city, but also decorated with adorable kitsch décor you’d only expect from a British tearoom. The Hidden Treasure Tea Room is another fantastic spot for those needing a gluten free or dairy free option, so you’re guaranteed everyone will be happy with this spot! 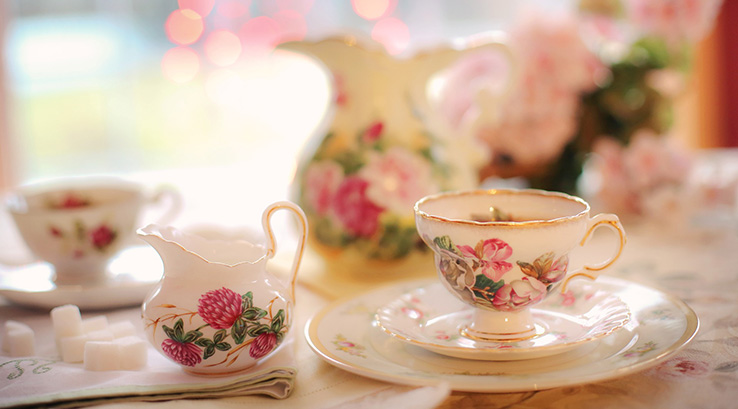 Synonymous with greasy cafés and roadside canteens, the full English is another British classic which relies on meat products as its foundation. Despite its name, the full English breakfast is often served all-day and dates all the way back to the 13th Century, with Anglo-Saxon households often serving significant, hearty breakfasts to visitors.

Unlike other British classics, there are no hard-and-fast rules for what must be included in a full English. Whether you’re wanting to tuck into a mega fry-up piled high with sausages and bacon, or a more modern variation with gently grilled mushrooms and seasoned avocado, there’s bound to be a variation to suit your tastes.

Our favourite vegan-friendly full English is served at The Shoetree Café in Heaton, just minutes from the centre of Newcastle upon Tyne and less than half an hour from Whitley Bay Holiday Park via car or public transport. Comprising of tempeh bacon, tofu sausages and homemade baked beans, this dish is available until midday and is the perfect weekend pick-me-up.

With big and small breakfasts on the menu, there’s something for all appetites at the Shoetree and if that doesn’t fill you up then why not pick up a slice of vegan cake? Baked daily, these sweet treats cannot be beaten! You can always burn off the big brekkie with a stroll around the nearby Heaton Park. 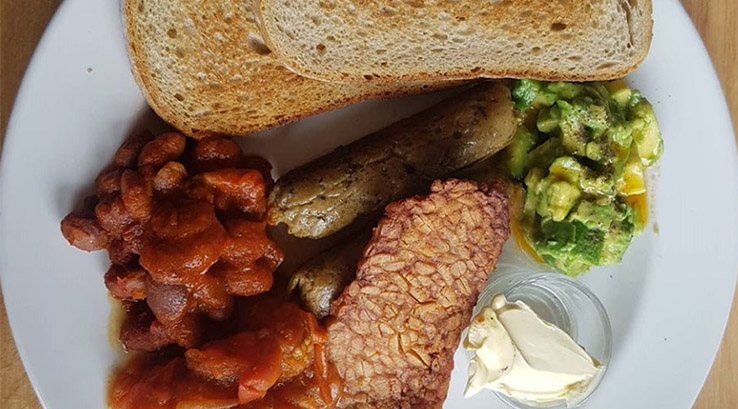 No prizes for guessing the origins of the next delicacy on our list! Abundant with various cultivars, Dorset is the perfect place to cook up a sweet-crumbed apple cake. If you’re holidaying in Dorset, you’re bound to come across at least one variation of this local dessert, however a vegan variation isn’t as easy to find.

Why not get the kids involved and cook up this traditional crumbly cake? Take a look at this recipe, dating back generations, for the classic southwest dish, with a plant-based twist. 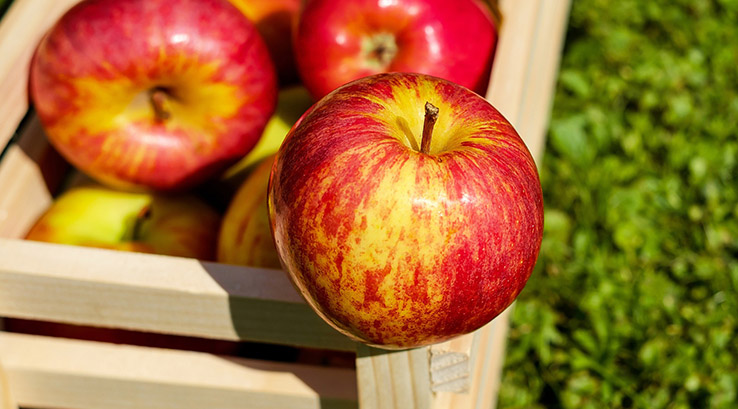 Due to the filtering process, the North East’s famous dark brew Newcastle Brown Ale is not suitable for vegans. However, the region is quickly building itself a reputation for delicious craft beers, many of which are suitable for vegans. With micro-pubs and small-time breweries popping up all over, the region has become a hub for ales, IPAs and even stouts. There are plenty of places to discover locally brewed beer nearby to Parkdean Resorts’ holiday parks in Northumberland and Country Durham, including Wylam Brewery, Tyne Bank Brewery and Almasty.

Due to the local brewing methods, the team behind the beer will always know what goes into their product, meaning you can be sure before you pick up a can or sip a pint if it’s suitable for a plant-based diet. If in doubt, take a look at Barnivore for comprehensive list of vegan-friendly beers, wine and liquors.

In recent years, devouring pub grub has become a quintessentially British pastime. Be it soaking up the rays in a glorious beer garden or tucking into a Sunday dinner and a pint with the whole family, dining at the pub is more than just a way to fill the tank – it’s a British staple.

At Parkdean Resorts, there will be some epic vegan and free from additions to the menu for July! Enjoy vegan-friendly versions of your favourite classic pub meals, along with some foreign-inspired fare. My top pick would be the Falafel & Spinach Burger, which is new to the menu for 2018, and even includes vegan cheese and hummus! This dish can also be served gluten free.

Another tasty choice is the Malay Vegetable Curry, which is inspired by Asian street food curries. The mixed vegetable and potato curry dish is cooked in a Malaysian-style sweet and spicy mild sauce, coupled with fluffy white rice and a chapatti flatbread.

If you’ve got a sweet tooth, you’ll be pleased to hear they’re even adding a vegan dessert to the menu – the Raspberry and Frangipane Tart is filled with scrumptious raspberry jam and almond frangipane, served with Alpro dairy-free custard. Yum!

Whatever your poison, there’s bound to be a vegan alternative for your favourite British dish. Have we included your favourite vegan delicacy? Let Parkdean Resorts know on Facebook or Twitter!