How many of these filming locations did you recognise as Wales?

Epic rolling hills and amazing coastlines make Wales the perfect location for many film and television settings. For filmmakers, the nation has so much to offer as everything is within reach, from the countryside to the dramatic wilderness and the breath-taking coastline. What better way to spend a day out than to discover some of your favourite on-screen locations for yourself? We’ve devised a list of some of the obvious, and more obscure, filming locations in Wales to help inspire your planning.

It’s easy to guess that Keeping Faith has been filmed in Wales, the Welsh drama showcases some stunning areas of the Welsh coast and villages to viewers. The show focuses on Faith, a lawyer and wife who is drawn into a dark mystery when her husband suddenly vanishes. The scenic backdrops form an essential part of Keeping Faith’s dramatic aesthetic.

Although set in the fictional town of Abercorran, Keeping Faith is actually filmed in the real-life town of Laugharne, nestled in the south of Carmarthenshire. The town lays on the banks of the Tâf Estuary, which you might recognise as the river that Faith’s house overlooks. Laugharne is a tranquil and idyllic place, so it is well worth a visit. Take some time to wander around the sleepy streets steeped in history. Walk along the same routes as those of the town’s most famous inhabitant, writer and poet Dylan Thomas; who once lived in the Boathouse overlooking the river. You can visit the summerhouse at Laugharne Castle where Thomas would go to write with wonderful views stretching out across the estuary, alongside a taste of medieval history amongst the castle’s ruins. 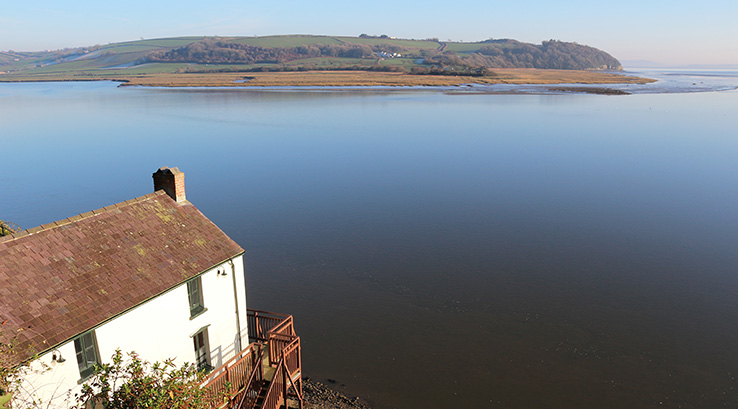 Just on the doorstep of Pendine Sands Holiday Park you’ll find the beautiful beach and bay of Pendine Sands. Stretching across 7 miles, the sandy stretch has long been a haven for wildlife and rock-pool lovers - so you’ll find plenty to occupy the little ones here. Pendine Sands has featured in a number of scenes of Faith walking on the beach. The beach also has historical significance, and is famous for being the location that the world record for land speed was set an astounding five times between 1924 and 1927.

It’s no secret that Doctor Who and companion programmes such as Torchwood and Class have been filmed in some other-worldly corners of the UK. The extremely popular series follows the adventures of The Doctor, a Time Lord who travels through time and space to help people in need. Doctor Who has shot many episodes in Wales and previously had its base at the Roath Lock studios in Cardiff. There are plenty of opportunities to plan a day trip to visit some of the show’s most spectacular locations, and you don’t need to travel through time and space to see them.

This magnificent castle is the largest in Wales and the 2nd largest in the UK. Dating back to the 13th century, the castle is used as a location in episodes of Doctor Who where it has doubled as a monastery. Enjoy an exciting day-out here exploring this impressive structure. Inside you’ll find impressive palatial features and the kids will love looking at the castle’s famously wonky tower. If you’re looking for somewhere to stay nearby, Trecco Bay Holiday Park is only a 40 minute drive away.

This 17th century mansion is nestled in amongst a massive 90 acres of parkland, and has been used as a filming location for numerous episodes of Doctor Who. Avid fans might recognise it from some of the show’s most iconic episodes, including David Tennant’s debut as The Doctor in “The Christmas Invasion”. Even on a rainy day there’s plenty to do here, wander around the expansive mansion house and witness diverse interiors that have been shaped by over 500 years of history. If the weather is on your side, explore the three formal gardens and see if you can find one of the estate’s many secret paths, or visit the apple trees in the colourful orchard.

Taking the name “Southerdown” from the nearby village, this beautiful beach is also known as Dunraven Bay. It provides the impressive setting for the fictional Bad Wolf Bay which keen Doctor Who fans will almost certainly recognise. The sandy beach is a beautiful location for filming and visiting, with spectacular stretching views. The bay is enclosed by imposing limestone cliffs, and is a popular location for rock-pooling and fossil hunting. For those fans of Doctor Who, you’ll likely recognise this as the beach from the iconic scene between the Doctor and Rose Tyler in the episode Doomsday

You could easily spend a full day here - when the tide goes out you can explore amongst the rocks, or amble along the cliff tops and try and spot some of the wildlife that has made the bay it’s home. 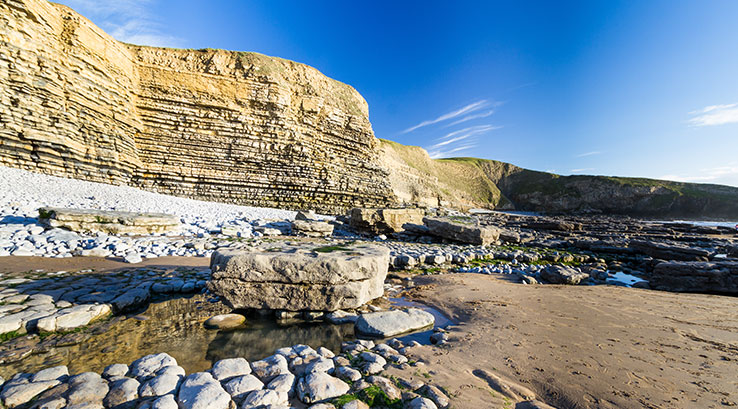 Britannia was filmed all over the world to make the setting for the historical period drama as authentic as possible. However, you may be surprised to discover that the show has been shot at some beautiful coastal and rugged countryside locations in Wales. The show broadcasts on Sky and Amazon Prime telling the epic history of the Roman Army’s desire to conquer Britain, or Britannia as it was then.

Some of the coastal scenes, including the beach scene featured in the pilot episode, were filmed at the iconic Rhossili Bay on the Gower Peninsula in Wales. Named as the best beach in Europe, it’s no surprise that this is a very popular filming location. It’s easy to image yourself in a different world here, with the golden sands and striking limestone cliffs as a backdrop. This beautiful bay is definitely worth a day trip to witness, if you don’t mind travelling a bit further. Rhossili Bay is around a 75 minute drive from Carmarthen Bay Holiday Park and you’ll enjoy the journey through some quaint Welsh villages and wonderful scenery.

Situated just 30 minutes from Trecco Bay Holiday Park you’ll find the magnificent cliffs of Nash Point. For the filming of Britannia they built an entire primitive settlement here in a cove near the impressive cliffs, so fans of the show might recognise it. Whether you’re a fan of the show or not, Nash Point is a fantastic choice for a day trip to remember. If you’re visiting the imposing lighthouse, or taking a walk along the beautiful cliffs tops, you’ll find plenty to do here. After you’ve finished exploring you can even stop by the café and experience a traditional hot Welsh cake. 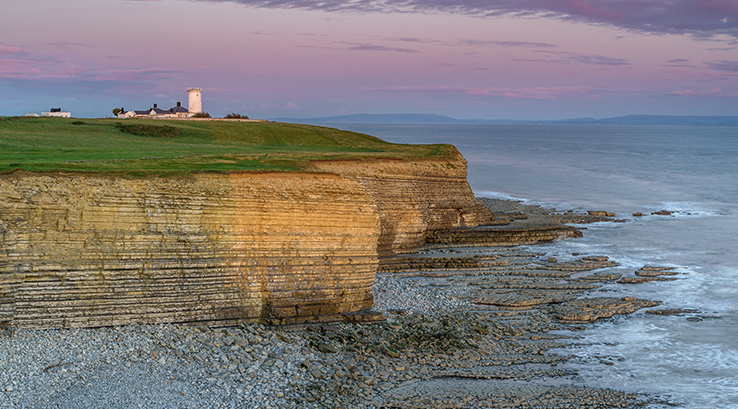 Similarly to Keeping Faith, Hinterland utilises the wild Welsh landscape to symbolise the show’s dark and dramatic detective theme. Primarily filmed in and around the town of Aberystwyth, Hinterland uncovers some lesser known and unique locations. If you’re looking for a comfortable base in the area, our Brynowen Holiday Park is only a 20 minute drive from all the picturesque market town of Aberystwyth has to offer.

This setting of this intriguing drama is primarily in and around the ancient town of Aberystwyth, and was filmed on location in the town. If you’re planning a Hinterland inspired day trip, be sure to walk some of the rugged and wild environment that surrounds the town. Within Aberystwyth, take a stroll along the marvellous Victorian promenade and enjoy the tranquillity of the coast. You’ll find a town steeped in Welsh history and folklore. For a unique experience, take a trip on the Electric Cliff Railway which is the only one of its kind in Wales, and the longest in the UK. At the top you’ll find the world’s biggest Camera Obscura giving you fantastic 360 degree views of the bay. 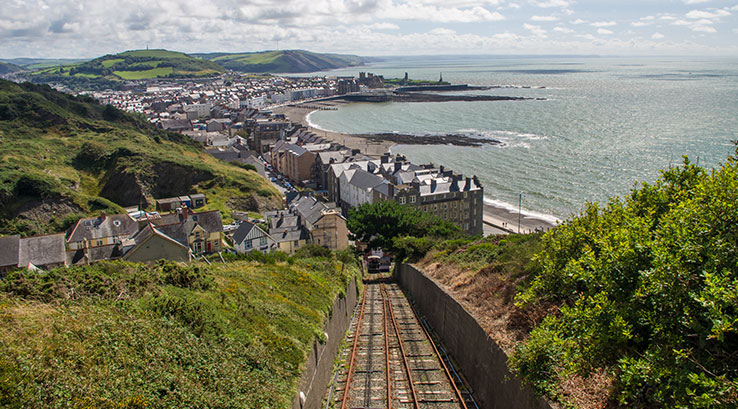 The Devil’s Bridge is actually a collection of three bridges, each built on top of the one before and stretching across the River Mynach. Devil’s Bridge features heavily in one of Hinterland’s scenes from the pilot episode and throughout much of the first series. The area gained its unique name from an old Welsh legend that has intrigued visitors. The legend goes that the Devil himself came to Wales to witness the stunning scenery and built the bridge to trick an old woman into crossing. Spend some time here walking the Devil’s Bridge Waterfalls which have been attracting visitors with their beauty for hundreds of years.

Have we missed one of your favourite locations? Let us know via our Facebook and Twitter pages!