Enchanting Locations around the UK

Britain is full of stunning locations that look as though they’ve been lifted straight out of a fairy-tale. From picturesque woodlands to towering castles, we’ve searched the UK far and wide to find some of Britain’s most enchanting attractions and the stories they’ve inspired.

Many of the magical and mystical stories we grew up with are inspired by real-life places that you can visit for yourself. Over the years, these enchanting places have influenced the works of numerous writers, including Beatrix Potter, JRR Tolkien and Lewis Carroll.

Set in 40 acres of sweeping grounds and enchanting gardens, Arundel Castle looks like it belongs in the pages of a storybook. One of the most beautiful castles in Britain, Arundel has been the family home of the Dukes of Norfolk and their ancestors for almost 1,000 years - and is one of the longest inhabited country houses in England.

The original castle was created in 1067 by Roger de Montgomery, the Earl of Arundel, who was promised a third of Sussex if he built a castle near the mouth of the river - to protect the area from invaders. Many of the original Norman features of the castle can still be seen today, including the keep, barbican and gatehouse.

Between 1870 and 1890 the castle was almost completely rebuilt, transforming it into the magnificent building you see today. Inside the castle, visitors can marvel at magnificent works of art in the striking interior of the house. Outside, wander through the walled kitchen garden, the Fitzalan Chapel, cut flower garden, Victorian Glass House and the rose garden - and admire the beautiful statues, topiary and fountains. Bursting with colours, the gardens are the highlight of the visit - and a place to let your imagination roam free. 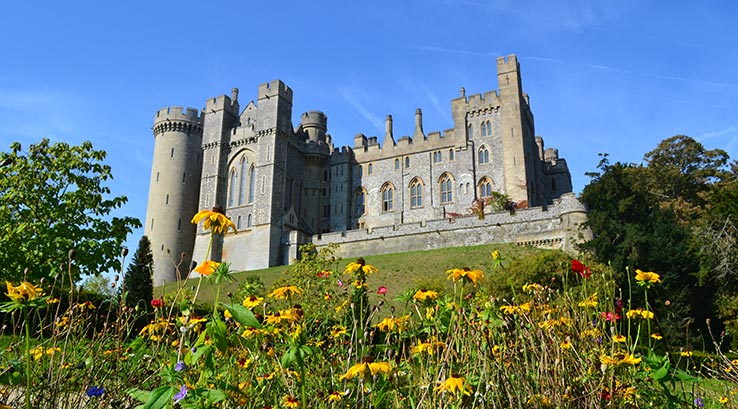 Only 30 minutes from Todber Valley Holiday Park is Janet’s Foss, a small but wonderful waterfall in the scenic Yorkshire Dales. The word “Foss” is from the old Nordic word for waterfall.

Janet’s Foss is formed by the waters of the Gordale Beck tumbling downwards over an area of limestone rock, to a wide pool below. The green moss growing on the edge of the falls adds to the fairy-tale feel of this enchanting area.

A small cave behind the waterfall is said to be the home of Janet, or Jennet, the Queen of the local fairies. Along the track to Janet’s Foss you will find several money trees - where visitors over the years have left a penny either as a gift for the Fairy Queen, or to make a wish.

Nestled in beautiful woodland, which is carpeted with bluebells and wild garlic during spring, Janet’s Foss is one of the hidden treasures of the Yorkshire Dales National Park. A lovely walking route from Malham Village, around 3 miles long, takes you along the beck and through fields and woods to reach this enchanting waterfall.

Opposite the falls there is another small cave, which is thought to have been lived in by copper miners who worked at the Pikedaw mines nearby. The pool at the foot of the falls, which is a great paddling spot during the summer, was also once used by local sheep farmers for “sheep dipping”, drawing locals from the nearby villages who would come along to watch the spectacle of the sheep bathing in the water.

Just over an hour from Carmarthen Bay Holiday Park, hidden in the middle of the Brecon Beacons, is Llyn y Fan Fach; a mystical lake at the foot of the towering Black Mountain. This area is one of the most scenic parts of the national park and is a popular place for walking. A walk around the lake offers up some of the best of Wales’ scenery, as you soak up the magical air of this spectacular location.

According to legend, Llyn y Fan Fach is said to have been the home of the “Lady of the Lake”, one of Wales’ most well-known folk stories. It’s said that a farmer once met a beautiful water fairy beside the shores of the lake, who promised to become his wife. However, if he was ever to strike her three times, she would return to the lake forever. They married and had three sons before the farmer broke his promise, and the Lady of the Lake vanished back into the mysterious waters.

The Lady of the Lake’s three sons found her several years later. They had inherited some of her magical powers and knowledge, and the Lady taught them how to create herbal remedies and cures, allowing them to become physicians and the first in a line of great healers in the area.

Even without the fairy tales and stories of mystical powers, the lake still has a sense of magic about it. Surrounded by towering peaks, the shadows that cast across the lake add to the other-worldly atmosphere of this scenic location.

Another one of Britain’s most picturesque castles is Bodiam Castle in East Sussex, surrounded by a moat of crystal clear waters and stunning landscapes. The magnificent moat that surrounds the castle is partly filled by a nearby natural spring, and the waters create amazing reflections of the castle - so be sure to bring your camera for some brilliant photo opportunities.

Built in the 14th century, Bodiam Castle is a real marvel. One of the most perfect castles in Britain, today you can explore the battlements, portcullis and fantastic spiral staircases. Climb to the top of the castle towers for stunning views over the surrounding Rother Valley.

Discover more about life in 1385, as colourful characters in costume roam the castle telling stories of medieval life. With archery and falconry activities to get involved with, it’s the perfect place for the kids’ imaginations to run wild.

Only 30 minutes from Camber Sands Holiday Park, you can let your mind drift away to stories of brave knights, princesses, and dragons in this fairy tale setting.

The deepest gorge in the South West, Lydford Gorge is full of mystery. Just under an hour away from Torquay Holiday Park, discover the secrets of this ancient forest on a magical day out for all the family. Wander through ancient trees and listen out for the roar of the Devil’s Cauldron, a naturally-formed pot hole. In a dark ravine, with mossy covered rocks, this beautiful place is sure to inspire you.

Walk right up to the majestic White Lady Waterfall, the tallest waterfall in the South West of England, which tumbles 90 feet into the pool below. The waterfall changes with the weather, from a gentle flow of water over the cliff to a strong torrent after heavy rain. There are smaller water features to enjoy too, especially Tunnel falls - a series of potholes formed by erosion, through which the river Lyd plunges and swirls.

Tucker’s Pool, a quiet and peaceful spot, is a beautiful place to feel close to nature. After crashing down the waterfall and passing through the Devil’s Cauldron, the river Lyd slows down and becomes quieter. Here, it stands almost still in a peaceful woodland glen. This is an idyllic spot to sit for a moment and watch for wildlife. Here you can look out for kingfishers and herons, and see if you can spot brown trout splashing around in the river.

Have you visited any magical and mystical places in Britain? If so, we’d love to hear all about it on our Twitter page.