All Aboard Half Term

Railway attractions to visit during February half term

Britain is home to the oldest rail network in the world and was the very first country to pioneer steam powered rail travel. While modern rail transport might have moved on, there are still a few operators dedicated to preserving our railway heritage - with a number of museums and attractions across the UK allowing visitors to experience the joys of rail travel as it once was.

With February half term just around the corner, you might be looking for the perfect holiday activity to keep the whole family entertained. Today, we’ve rounded up some of the UK’s finest railway attractions and museums, from miniature steam train rides to exploring Britain’s industrial heritage, there’s something for everyone to enjoy this half term.

Just a few miles outside of Newquay on the Cornish Peninsula, you’ll find Lappa Valley Steam Railway and Leisure Park. This historic track bed is one of the oldest in Cornwall, originally using horse-drawn carts to carry ore along the track to Newquay harbour in 1849. The line was soon taken over by the Cornwall Minerals Railway who replaced the horse-drawn carts with steam powered locomotives. Eventually the track was upgraded and opened to public passenger trains in 1905 as part of the Great Western Railway - even seeing use during World War 2, when it was changed to main line standard to carry freight and heavy artillery.

While the original track is now gone, Lappa Valley operates a short steam train service along a section of the original track bed - allowing visitors to experience the nostalgia of steam powered rail travel. The steam train ride takes visitors to the leisure park, where you’ll find even more fun for all the family including two additional miniature railways, a canoeing lake, crazy golf and much more. 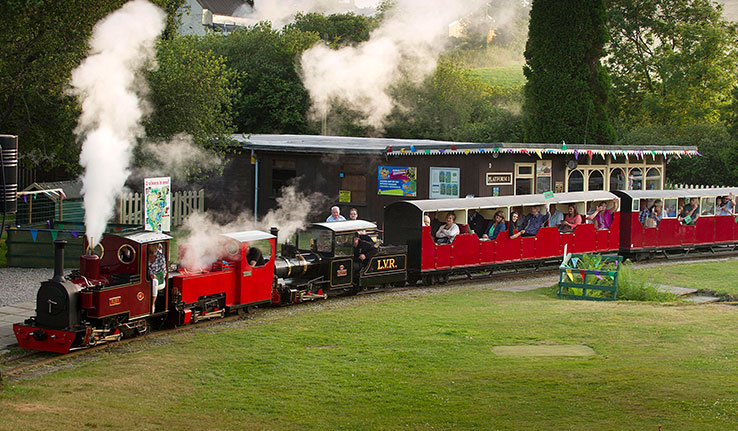 Want to turn your Cornwall day out into a relaxing half term break? Looe Bay Holiday Park is perfectly located for exploring what Cornwall has to offer this February.

The Gwili Steam Railway runs through the rural Gwili Valley, hugging the river along its route. Operated by the Gwili Railway Company and its dedicated team of volunteers, the leisure passenger service runs a four and a half mile round trip on a restored section of standard gauge track that was once part of the Carmarthen to Aberystwyth line. While the original passenger line was closed in 1965, with much of its track lifted, an 8 mile section of track bed was bought and rescued by the Gwili Railway Company between 1975 and 1978.

While the company and its volunteers are still hard at work trying to extend the line to cover the full 8 miles of trackbed, today visitors can enjoy a vintage diesel or steam-hauled passenger service between Abergwili Junction and Danycoed Halt - check their website for upcoming opening dates. The short round trip takes just over an hour as the train meanders through the valley, making stops en route, before returning back to Abergwili Junction.

Video sourced from A. W. Vaughan

Why not explore Gwili Valley and beautiful South Wales this half term with a short break at Trecco Bay Holiday Park?

Nowhere encapsulates the quintessential British seaside holiday better than Scarborough, home to Yorkshire’s North Bay Railway. One of the oldest miniature railways in the country, the North Bay Railway has been operating its leisure passenger service from Peasholm Park to Scalby Mills station since 1931.

The miniature railway continues to run services today, with its four original steam-outline diesel locomotives still operating the route - nearly 90 years later! North Bay Railway welcomed a new addition to its fleet in 2016, with a new steam powered train ‘Georgina’ joining her diesel powered counterparts. The railway will be open from the 10th February, with trains running every 30 minutes between 11am and 3:30pm. Once you’ve enjoyed the journey, why not let the kids burn off some steam on the Sky Trail Adventure? This two level rope and beam adventure course offers heights, thrills and fun for kids and adults alike. 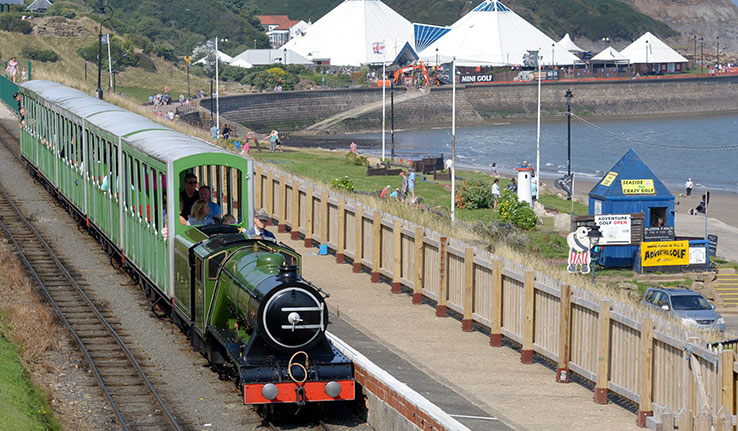 Why not enjoy a traditional seaside break on Yorkshire’s beautiful coastline with a stay at Cayton Bay Holiday Park, putting all of the Yorkshire Coast’s top attractions within easy reach.

Family days out don’t get much better than an afternoon spent at Beamish, the Living Museum of the North. Here, guests can step back in time to the 1820s, 1900s and 1940s - exploring the North East’s industrial heritage across over 300 acres of stunning countryside. With original and replica buildings to explore and a full high street in 1900s town, staffed by actors to make the experience even more real, Beamish offers a fully immersive look to the past.

A trip to this open air museum wouldn’t be complete without a steam train ride on the Pockerley Waggonway. This recreation of a Georgian railway offers visitors the chance to take a short ride through the landscape, passing Pockerley Old Hall and St. Helen’s Church. The waggons are hauled by a replica of the ‘Steam Elephant’ and William Hedley’s ‘Puffing Billy’ - the world’s oldest surviving steam engine, and the leisurely ride is guaranteed to put a smile on your face. 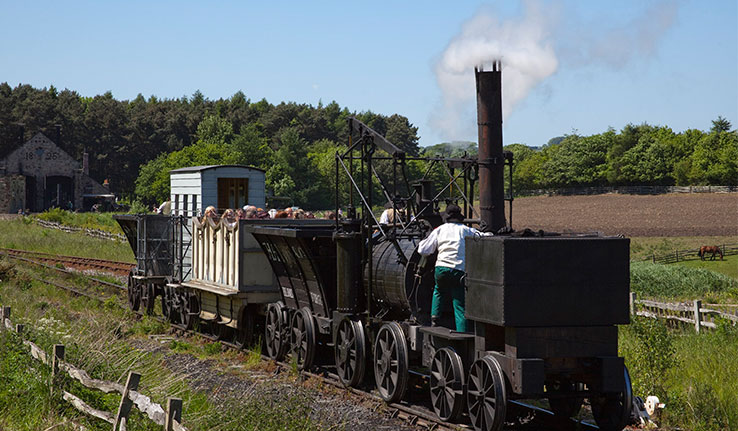 Looking to book a February half term break in the North East? Grab a fantastic last minute deal at Whitley Bay Holiday Park.

For an enjoyable and educational day out in Essex, look no further than the East Anglian Railway Museum in Essex. With a variety of railway buildings, steam and diesel locomotives and carriages on display, visitors can explore the golden days of British rail travel.

Don’t forget to visit the restoration shed, where you can get a look behind the scenes at the challenging work that goes into maintaining a fleet of historic trains. Here you can watch the team of volunteers and engineers carry out repairs and restoration work in order to bring vintage engines and carriages back to life. Once you’re done exploring, it’s time for a bit of fun - with a ride on the museum’s miniature railway (*open on select dates). Finally, finish off your afternoon with some tea and cakes in the traditional dining car for a unique afternoon tea experience.

Valley Farm Holiday Park is just over 30 minutes away from the East Anglian Railway Museum and is perfect for a half term holiday on the Sunshine Coast - offering the ideal remedy to the February blues.

Tell us what you’re up to this February half term on our Facebook page.