A Tour of the Best Castles in the UK

Around the UK, whether it’s England, Scotland or Wales, you’re never too far away from a castle or heritage site. These ancient buildings keep British history alive in the modern day. Most of them have guided tours and special events throughout the year. This is brilliant for creating amazing memories and learning about British history. With there being so many castles in the UK, it can be hard to select the right one near you. Here is a small selection of a few around England, Scotland and Wales that stand above the rest. Most of these are family friendly and sometimes even give discounts for children, OAPs or students, so check on their websites for concessions. If we have missed any: let us know on our Twitter or Facebook which castles you have enjoyed while staying at a Parkdean Resorts Park.

Is there a more iconic view of England than seeing the White Cliffs of Dover as they tower over the English Channel? Dover Castle of course. Described as the ‘Key of England’ due to its significance in history, this is a must when staying in Kent. Founded in the 11th century, this is the largest castle in England. Throughout history, Dover Castle has played a part in the defense of England. From the medieval court of Henry II being brought back to life, through to the WWII underground hospital: there is loads to explore in this amazing historic site. Eagle-eyed film fans may recognise the castle as the setting for Marvel’s Avengers: Age Of Ultron, Disney’s Into The Woods or TV drama Wolf Hall. Keep an eye on their website for events all year around including Halloween days out and medieval re-enactments.
Nearest park: St Margaret’s Bay (3.5 miles)

Alnwick Castle is possibly Northumberland’s most recognised site having been used as a filming location for Harry Potter, Downton Abbey and even Transformers: The Last Knight. The castle makes an enticing spectacle for prospective film-makers and visitors alike, thanks to the stunning state rooms, impressive art collection and mysterious cellars. The castle’s history goes as far back as the 11th century, which is preserved to this day. Alnwick offers historical grounds tours, plus ‘on set’ film / TV tours, and live performances of classic plays - making this an ideal visit, whatever your interests. Check their website for updates on events and possible closures for filming. Alnwick also has some of the finest chefs in the North East, producing top quality food each day and really showing off their talents at The Sanctuary Restaurant that also host special events.
Nearest park: Cresswell Towers (19.1 miles) 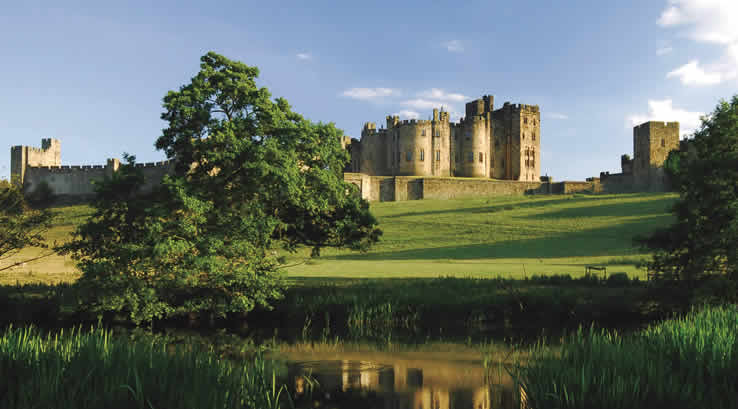 What remains of Tintagel Castle has been around since the Roman period, and even has links to the legendary King Arthur. The castle itself is spread over the Cornish peninsula of Tintagel Island, giving it a real medieval feel. This is great for those who love exploring and long walks by the coastline. Although this is a historical site, there are facilities such as toilets, and of course a gift shop. Tintagel does welcome dogs, but they must be kept on a lead as there are some steep drops. Due to the rough terrain: pushchairs cannot be used in certain areas of the site, this also applies for wheelchairs. You may also like to pack a picnic for the family as there are grassed areas to enjoy the fantastic views on. There are also events at the site including archaeological days for the younger ones. 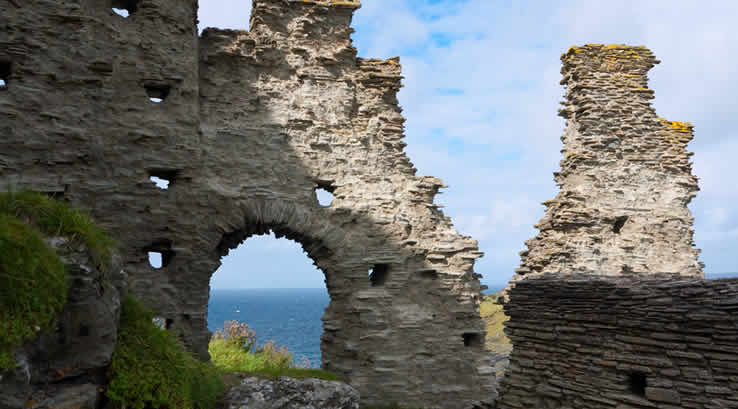 This castle has been standing for 1,000 years and is the strongest castle on the Isle of Wight. Most famously - Charles I was imprisoned here prior to his trial. This now serves as a site of heritage and history on the Isle, as you can tell from the museum, Edwardian-style gardens, and the popularity of the castle grounds as an attraction. Keeping the medieval vibe alive: there are regular jousting shows and battle re-enactments throughout the year. For younger members of the family there is ‘knight school’ where trainees get to paint their own shield and learn about how knights trained in medieval times. Carisbrooke Castle also holds special events through-out the year, including Halloween. The well-house and ground floor of the museum are wheelchair friendly, but due to the steep stairs - the wall walk, and the upper floor of museum, are inaccessible. Dogs on leads are allowed in certain areas also.

Caerphilly Castle is the biggest in Wales, and by far the most scenic. It is also second largest in Britain after Windsor. This giant of a castle is surrounded by a series of moats and watery islands. Used as a setting for productions, such as ‘Merlin’ and ‘Doctor Who’ in the past, Caerphilly is sometimes closed for filming so check their website for opening times. The castle is accessible by tourists and features some of the original ‘siege engines’ from medieval times. There are no guided tours, but there are several events at the castle such as ‘The Big Cheese’ festival, enchanting stargazing events, and bank holiday fun days - filled with medieval activities. It’s a bit of a hike from our nearest park in Carmarthen Bay, but one for history buffs and fans of seeing historic sites up-close. 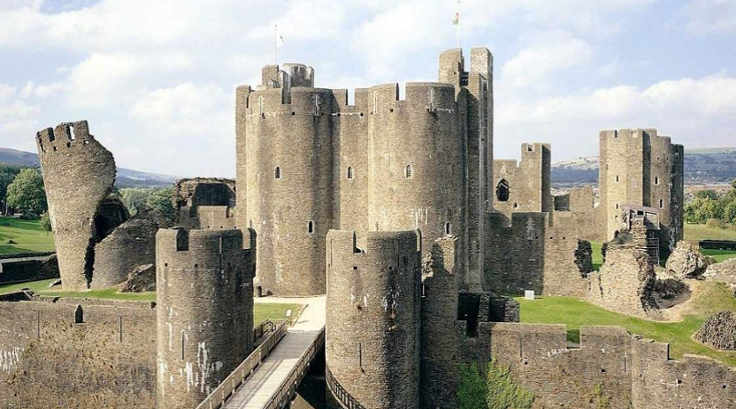 This castle in Ayrshire is certainly one of a kind. The first thing you will notice is the colourful exterior, which is the result of an international graffiti project, bringing a modern twist to this historical site. Situated in North Ayrshire, this is the oldest castle in Scotland and dates back to the 12th century. Other than the stunning aesthetic, there are plenty of events at the castle throughout the year. In the past there have been Viking-themed weekends, the ‘Gruffalo’ trail which brings the popular story to life, and a series of live shows known as ‘The Kelburn Garden Party’. Kelburn Castle offers a different experience to your normal castle visit, but with unique attractions, it's a worthwhile trip for you and your family.

If it's Shakespearean landscapes you're looking for on a castle visit – Cawdor Castle may have what you're looking for... Or not, as it turns out. Although King MacBeth is referred to as the ‘Thane of Cawdor’, the castle itself was built many years after the real-life King had died. Either way, you will agree this is a magnificent castle to visit during your holiday in Scotland. Private tours can be arranged by contacting the castle, yet the most impressive thing about Cawdor is the spectacular gardens. The four gardens also have guided tours by the head gardener, available to book in advance. Unfortunately the castle and gardens are closed at certain times of the year, so it’s best to check in advance. Nevertheless, Cawdor is a stunning Scottish castle to see if you get the chance. 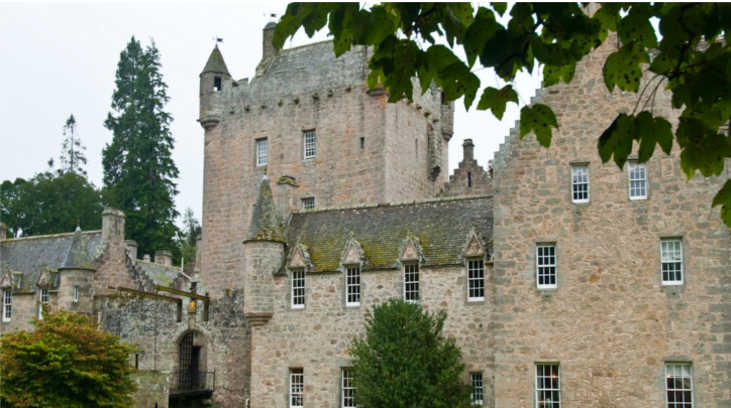 Wales is recognised as the capital of castles - and Pembroke Castle doesn’t disappoint.  Known for its unique design, including cylindrical towers and a stone dome, this castle has been standing since the 12th century and was the birthplace of Henry VII. What’s also impressive about Pembroke Castle is their events which change day-to-day. From dragon days, living history days, falconry and a circus workshops – there’s plenty to keep the family entertained. There’s also exhibition rooms where you will meet Pembroke’s cast of characters, with attractions celebrating the castle’s rich history. The centre-piece is the ‘Great Map Of Wales’ – a 1,000 square metre map outlining Wales’ many landmarks. This is a spectacle to see for anyone of any age. Although there is a café and a gift shop, visitors are welcome to take part in brass rubbing. This is a way to take home a personal souvenir of their trip to Pembroke Castle for a small cost. 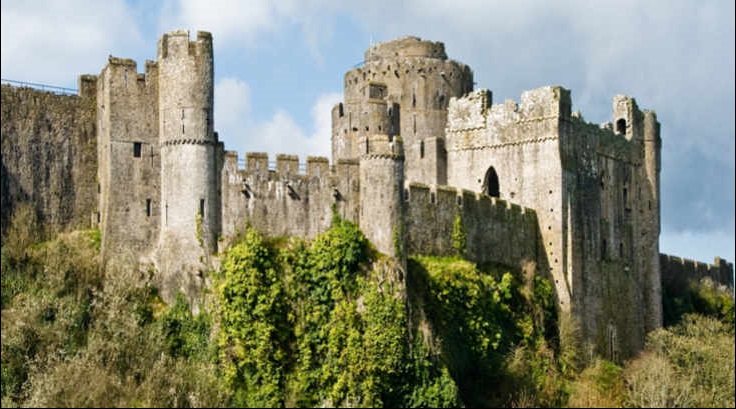