5 Endangered Species in the UK

From the Scottish Highlands where red deer roam, to dolphins splashing in the crystal-clear waters of the Jurassic Coast; wherever you holiday in the UK, you’ll be surrounded by beautiful wildlife.

The UK is home to thousands of different animal species, ranging from crawling insects to larger mammals, and everything in-between. Today, we’ve teamed up with local experts to unearth some of the rarest animals found around our holiday parks, which you might just want to keep an eye out for next time you’re on holiday. 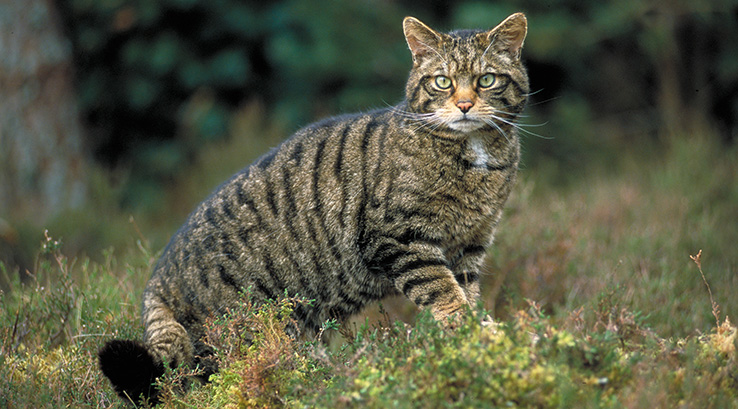 Rarer than the tiger, it’s estimated that there are less than 300 Scottish Wildcats left in the wild, so you’re extremely lucky if you ever get to see one! In appearance, they look similar to domesticated cats, however they are roughly 25% bigger and can weigh up to 9kg. They also have larger brains, ears that rotate, and excellent camouflage.

Scottish Wildcat Action explained that one of the main reasons behind the decline in this animal is because of domesticated cats, which are breeding with the wildcats. The organisation is working hard to increase the population of wildcats. It is doing this by working with local people to reduce the risk of hybridisation and by breeding wildcats which can be released through a conservation breeding programme.

Wildcats hunt at dawn and dusk, and they will eat rabbit, vole, and birds. They generally live in remote countryside locations in the Western and Northern Highlands of Scotland, so if you’re staying at Nairn Lochloy Holiday Park or Grannie’s Heilan’ Hame Holiday Park, you’ve got a better chance of spotting one.

Spotting a black fox in the UK is extremely rare. It’s so uncommon in fact, that Wildlife Online has received 147 ‘recent reports’ of black foxes from the UK, however, only seven of these were supported by photographic evidence. Two of these were in unknown locations, and the other pictures were taken in Haslemere, Lancashire, Yorkshire, Cambridge, and West London.

Generally, every cub is born with a black coat, and as they grow, their coat changes colour to the common red colour we see on most foxes. However, some remain black due to a rare genetic flaw, which dates back hundreds of years.

The black fox is so rare, a charity dedicated to them, The Fox Project, has never received one in the 26 years they’ve been running. Over 12,000 foxes have gone into their care and not one of them during this period has been black.

Dating back to medieval times, the black fox is considered unlucky, and is deemed to be a bad omen. People to this day still believe in the superstition that the black fox brings disaster to whoever sees it. However, it is estimated that black foxes only account for about 1% of the population in Europe, so I wouldn’t be worried about receiving bad luck!

Few people in the UK will have seen the extremely cute member of the Mustelidae family, the pine marten. Pine martens were a common creature in the UK before the 20th century, which is when they became practically extinct due to poaching and loss of habitat.

Up until recently, most people thought that pine martens were extinct in most areas of Britain, and believed that they only survived in the Scottish Highlands. However, a sighting in Shropshire in July 2015 changed people’s thoughts. This was the first sighting of the animal in England for over a century.

The Vincent Wildlife Trust are just one of the organisations which are aiming to save the pine marten. In 2014, they teamed up with various conservation bodies, and launched the Pine Marten Recovery Project, to help restore the population of pine martens in England and Wales.

The perfect habitat for the pine marten is somewhere there are plenty of trees in which to make their dens, and lots of prey to eat, such as mice, birds, squirrels, and berries.

The red squirrel is one of Britain’s most loved wild animals, however they’re also one of the most endangered. The Scottish Wildlife Trust describe seeing one in its natural habitat as a special moment, and something that will stay with you forever.

According to Red Squirrels Northern England, the onetime high population of around 3.5 million red squirrels in the UK is currently estimated to have dropped to just 120,000, with only 15,000 of these located in England.

The reason for this rapid decline is mainly due to grey squirrels carrying “Squirrel Pox Virus”, which is deadly to red squirrels. The Scottish Wildlife Trust have joined forces with many other groups, who are all on a mission to save the red squirrel. They are doing this by preventing grey squirrels moving North and creating the ideal habitat for red squirrels, in order to protect the uncommon animal.

These rare squirrels can be found in woodlands, and even parks and gardens if you’re lucky. Currently, Scotland is home to the majority, but conservation activities are underway across the whole of the UK, to stop the decline and to make sure we can still see red squirrels in years to come. The forests of Dumfries and Galloway are a common sighting spot, so if you’re staying at Southerness Holiday Park or Sundrum Castle Holiday Park, you might even get to see one for yourself.

If you do come across a red squirrel, then please report the sighting to  www.scottishsquirrels.org.uk.

The lizards have gone through such a major decline because of habitat loss, with their coastal dunes and heathland rapidly decreasing due to intensive farming and new building developments.

Although they’re not spotted very often, sand lizards are quite easy to identify. Females are a sandy brown colour, and they have rows of dark patches along their backs. Males have green sides which turn extremely bright during the breeding season, making them easier to spot.

To help keep the sand lizard from becoming extinct, in 2013, 70 young sand lizards were released on to the Flintshire coast in Wales, and then over 400 more were introduced to sites in Merseyside, Surrey, Hampshire, and Dorset. Therefore, if you want to spot one, these would be the best places to visit.

If you’ve stumbled across other rare wildlife in the UK, we’d love to hear about it on our Twitter page.