A Whistle-Stop Whisky Tour of Scotland

Taste the finer things in life at these top spots

We’ve teamed up with The Scotch Whisky Experience to bring you our top picks for whisky-lovers holidaying in Scotland. The five-star visitor attraction, which sits on Edinburgh’s iconic Royal Mile, is home to the world’s largest whisky collection. Where better to experience Scotland’s most famous export?

From the historic whisky heritage in Speyside, to restored distilleries in Dumfries & Galloway, The Scotch Whisky Experience offers visitors the chance to explore the length and breadth of Scotland – one tipple at a time. 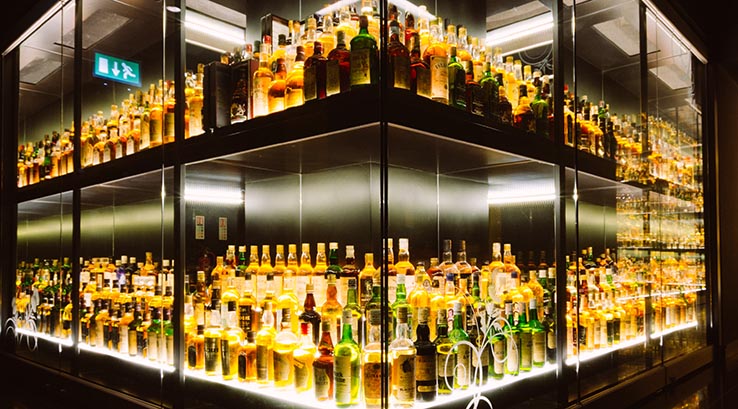 The World's Largest Whisky Collection at The Scotch Whisky Experience

We’re delighted to bring The Scotch Whisky Experience to life and share some of the most iconic distilleries in Scotland along with our favourite whiskies. Come with us on a journey across Scotland and discover for yourself the whisky wonders the scotch homeland has to offer…

World-renowned for its warm waters and fertile land, perfect for growing the barley necessary to produce Scotch whisky, the Speyside region has been associated with the drink for generations. Speyside, which is home to more whisky distilleries than any other region, is the birthplace of some of the most famous whiskies in the world, including Glenfiddich, Benriach and Glenlivet.

In an area abundant with places to experience the production and distilling process of Scotch whisky, it’s tough to choose just one spot in Speyside. Nestled on the banks of the River Lossie, you’ll find the Glen Moray Distillery. What makes Glen Moray special is not only Speyside’s unique setting, but also the fact that it’s had just five distillery managers since its conception over a century ago.

Just over a half an hour drive from Nairn Lochloy Holiday Park, Glen Moray is the perfect spot to learn about the history and production of Scotch whisky in the heart of Speyside. Sitting just outside the town of Elgin, the distillery is small and friendly, with tours 7-days a week from May to September, and Monday-Friday in the winter months. 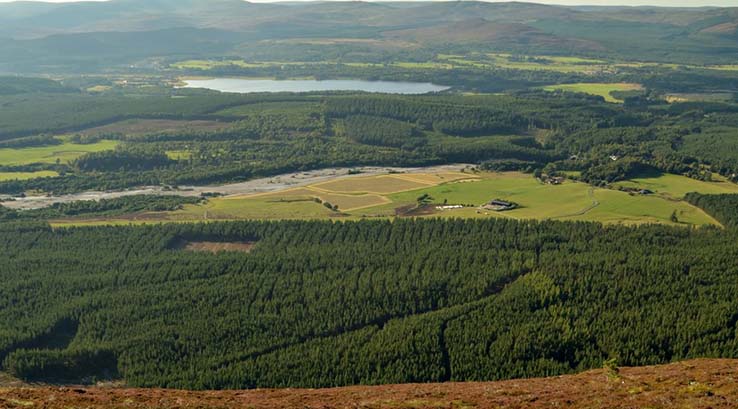 The surrounding area of Elgin is known as the Laich of Moray, from which the distillery gets its name. And if you needed another reason to visit this stunning location, it is thought that the Laich of Moray enjoys forty more days of summer than any other part of Scotland, according to an old Moray saying. The distillery attributes the fine water used in its whisky production process to this unusual phenomena.

Tours start from just £5 per person with tasting for adults (under 18’s go free), with the option to add special tastings onto bookings most days.

For out next stop on the whisky tour of Scotland, we’re moving west to Dumfries & Galloway. The west coast of Scotland offers a whole new area to explore the world of whisky, and we’ve picked historic Annandale Distillery as our top pick for holidaymakers hoping to learn about the spirit. 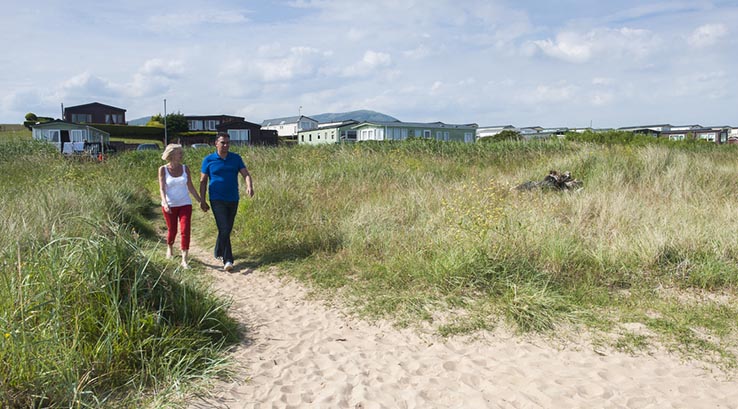 Southerness Beach is just minutes from the park

Just fifteen minutes from the A74, the Annandale Distillery is easily accessible and the perfect way to become immersed in Scottish whisky heritage, not far from the border. Less than an hour drive from Southerness Holiday Park, the distillery has an interesting story, first opening its doors in 1836 and later bought by the famous whisky mogul Johnnie Walker. In 1918, Annandale Distillery closed its doors for what seemed like the end of days for Annandale Distillery.

In 2007, the buildings, which were being used as a farm, were bought by David Thomson and Teresa Church marking the re-birth Annandale Distillery, taking pride and place in the Scottish lowlands it had once dominated over a hundred years previous.

Visitors can book a variety of tours of the distillery, which is a unique mix of old and new buildings and equipment. A café and shop are also on-site for anyone wanting to take home a little piece of Dumfries and Galloway for themselves.

One of the smallest distilleries in Scotland, Edradour is a hidden gem in the Scottish Highlands. Small but perfectly formed, Edradour started production in 1837, taking advantage of Perthshire’s pure water and sunny glens – an ideal combination for fine whisky production.

The distillery changed hands several times in the 20th Century, before being bought by independent bottler Signatory Vintage, led by Andrew Symington in 2002. Symington, who is a Master of the Quaich (an elite society for fine producers of Scotch whisky) has worked tirelessly to transform Edradour into a world-class whisky producer, while maintaining many of its original features. Despite its small capacity, Edradour is known all over the world for its unique range of bourbon and wine cask single malts, and even a smoky variant called “Ballechin” for those who enjoy a more peaty flavour.

Translated as “between two rivers”, Edradour sits just outside the Victorian town of Pitlochry, and can be reached in half an hour from Tummel Valley Holiday Park. The distillery welcomes visitors Monday – Friday in winter months and Monday – Saturday between April – November, with tours starting from £10 for adults and £5 for children (ages 12-17). 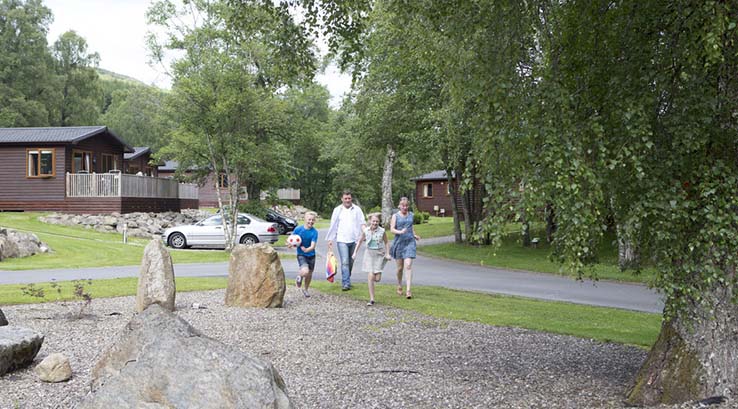 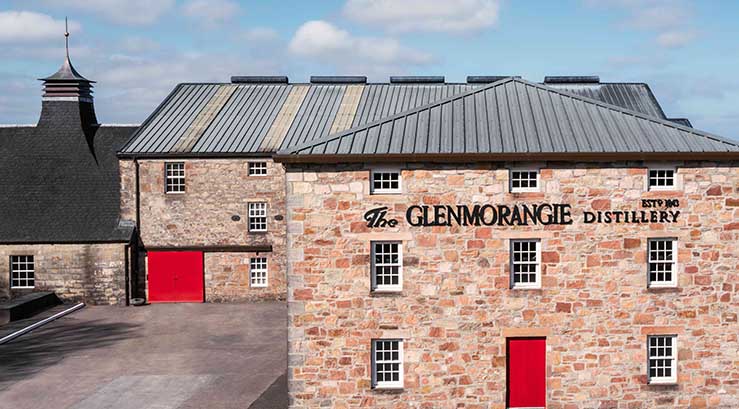 For our final stop on the whisky tour of Scotland, we’ve come back to the Highlands to visit the Glenmorangie distillery in Tain, Ross-shire.

If Edradour is David, then Glenmorangie is Goliath. With an annual production of around 6,000,000 litres, there’s little worth knowing about whisky that these guys don’t. Home to Scotland’s tallest stills, Glenmorangie sits on the banks of the beautifully serene Dornoch Firth. In fact, the name Glenmorangie is thought to derive from Gaelic and mean “vale of tranquillity”. 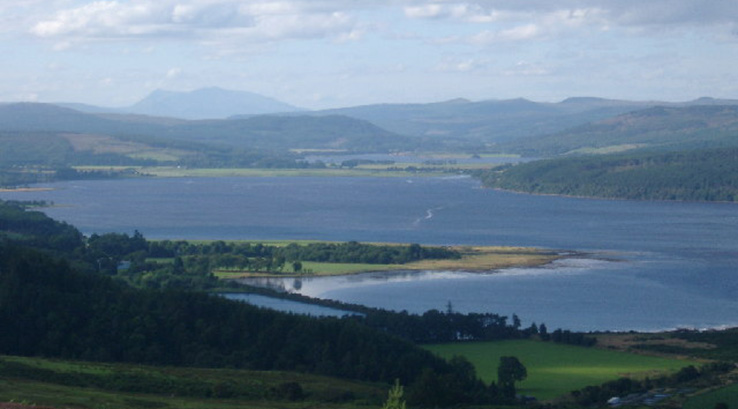 Less than 20 minutes on the A9 over the Dornoch Firth, any whisky-lovers holidaying in Grannie’s Heilan’ Hame would be mad not to visit the distillery for a nip or two. Along with a distillery tour, telling the tale of over a century of whisky production at Glenmorangie, visitors can also enjoy for a tasting masterclass led by the expert guidance of the Director of Distlling, Whisky Creation & Whisky Stocks, Dr Bill Lumsden.

Tours range from £7.50 and children are welcome – booking online is advised to make the most of your trip to Glenmorangie!

As you can see from this whistle-stop tour, Scotland has something for everyone – whether you’re a dedicated Scotch whisky fan, or simply whisky-curious, a holiday in Scotland isn’t complete without a visit to a distillery or two.

“From breathtaking mountain ranges to seaside towns, rolling fields of barley to windswept island coves – the varied whisky regions of Scotland mean that no distillery is ever the same,” said Julie Trevisan Hunter, Head of Marketing at Scotch Whisky Experience.

“Here at the Scotch Whisky Experience in Edinburgh, visitors explore the different flavour profiles of regional single malt Scotch whiskies, which many find is the perfect preparation for getting out there and exploring the whisky distilleries of Scotland for themselves.

“Our advice is simple – visit every distillery you can! Seeing whisky production as it happens is a brilliant way to understand how the final flavour is affected, not just by the equipment used, but by the water, the surrounding countryside, and the communities who look after it.

“And if you’re only in Scotland for a short time? Take a one-hour whisky tour at the Scotch Whisky Experience to kick start your Scotch whisky knowledge and get sipping like a true connoisseur.”

There you have it -  a whistle-stop whisky tour of Scotland! Have we missed any of our favourites? We’d love to hear about your favourite whisky spots in Scotland. Let us know on Facebook or Twitter.