Magical and sacred places to visit in the UK

With an abundance of magical and sacred sites across the UK, you’re never too far from your next mythical adventure. Our ancestors throughout history have placed special significance on certain areas believing them to be sacred sites and the rich history and folklore that surrounds them mean that we still visit them to this day, fascinated and hoping to learn more.

From the sacred religious landmarks that have shaped our landscapes to the mysterious sites that have long been shrouded in legend, join us as we take a look at some of the most magical places to visit in the UK.

Just under an hour’s drive from Cayton Bay Holiday Park you’ll find Wade’s Causeway. Local folklore has talked about this ancient stone road being the product of mythical Wade the giant’s handiwork for hundreds of years. The story goes that the giant Wade, a figure from Norse mythology, built the huge linear monument as a sacred path for his wife to help her navigate the pastures.

There has been much disagreement over the origins of the causeway with the most common belief now being that it dates back to the Roman occupation of Britain and was constructed by the Roman military. You’ll now hear this area called by a multitude of names including Wade’s Causeway, Wheeldale Roman Road and the Roman Road.

Whatever the origin of this road on the North York Moors, it undoubtedly offers some spectacular rural scenery and interesting mythical tales about its origin, to experience it there are a number of set walks you can do following the signpost ‘roman road’. 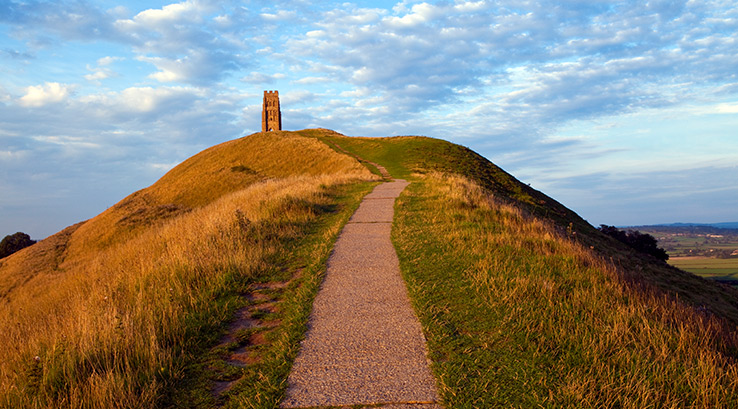 Glastonbury has been considered a sacred place to worship by humans ever since they settled here. Long ago in ancient times it was a former island surrounded by the sea, and was even thought to have been the location of the ancient island of Avalon, which features in the legend of King Arthur.

One of the most iconic landmarks in the UK is Glastonbury Tor, a large towering hill topped by a ruined 15th century church. The church stands out in stark contrast amongst the surrounding landscape. The tor has a rich and varied history with the site being considered of spiritual and religious significance for years.

Ancient remains found at the site, dating from around 5000 BC, reveal evidence of stone circles. The unique terracing of the Tor is also thought to be the remains of a Neolithic labyrinth, a kind of maze which would have been built for ritual purposes. In early-medieval times, there was a small monks’ retreat at the top of the Tor. In the 1100s a chapel, St Michael de Torre, was also built there. Destroyed by an earthquake in 1275, the chapel was rebuilt in the early 1300s - and its tower remains there to this day.

At just over an hour from Warmwell Holiday Park there’s lots to discover on a family day out to Glastonbury, whether you want to climb to the top of the Tor and take in the unique history of this sacred place or visit the dramatic ruins of Glastonbury Abbey. 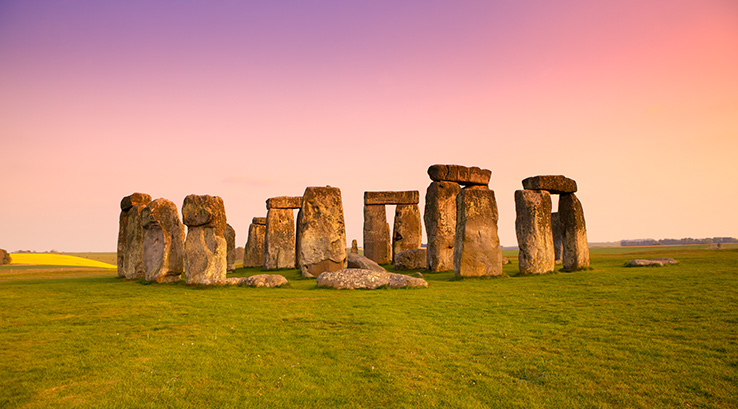 It’s impossible to put together a list of some of the UK's most ancient sites without including the famous Stonehenge. A structure that has baffled researchers for many years, it’s thought that Stonehenge was built over 5,000 years ago in the Neolithic age.

The iconic stone circle is considered a place of special religious significance for many and thought to be one of the most sacred places where ancient cultures performed burials, rituals and ceremonies. It’s fascinating to ponder over how this huge stone structure came to be in a time without modern building equipment, Stonehenge is a must visit on your list of the most magical places to visit in the UK.

Stop and experience the spiritual atmosphere of Stonehenge on your way down South to Sandford Holiday Park which is just over an hour away from the site.

Grimes Graves is not a burial chamber as its name might suggest, but is the only Neolithic flint mine that is open to the public in Britain. Around 45 minutes from Heacham Beach Holiday Park, the extraordinary surface landscape of the mines has puzzled people for years. It wasn’t until they were excavated in 1870 that their use was fully understood. Dating from around 2500 BC, the mines were created to dig up flint - a type of rock found in chalk, which was used to make tools, weapons, and various other items.

When the mines were eventually excavated, evidence of religious worship was discovered that suggested the miners took their religion with them deep underground. Fascinatingly one of the chambers was believed to be a fertility shrine – complete with an altar, a goddess figurine and other spiritual items. It’s thought that this shrine was created by the miners as a religious offering to ensure the mines would continue to be successful.

Explore the mine chambers for yourself by descending down the 30ft ladder into one of the mine shafts and discover how the miners once used antlers to hack out flint from the hard rock face. The surface of the mines also makes for a unique landscape to explore with strange alien-like mounds and hills. You can also hike along one of the many scenic walking routes and enjoy some of the stunning views and scenery. 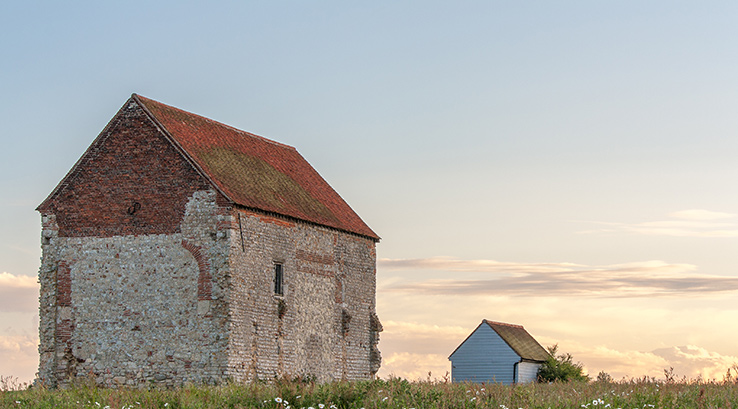 Take a peaceful step back in time at the ancient Chapel of St Peter-on-the-wall, remarkably this chapel is among the oldest standing churches in England. It is commonly believed that the church structure we see today was built by Bishop Cedd in 654 for the Kingdom of Essex.

People travel from all over the world to visit and worship inside the sacred and historical chapel, the chapel is always open to visitors however as it is still in use there will be services held throughout the week. The beautiful countryside that surrounds the chapel from all angles is a perfect place for a picturesque picnic whilst thinking about the magnificent history of this site. You can visit the chapel during a stay at Coopers Beach Holiday Park which is an hour’s drive away.

The Holy Island of Lindisfarne, Northumberland 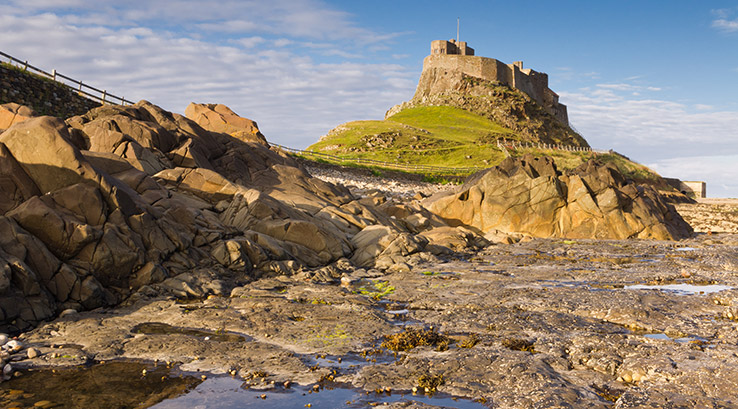 A few miles off the Northumberland Coast and just 30 minutes from Eyemouth Holiday Park lies the magnificent Holy Island of Lindisfarne, regarded as one of the most tranquil and sacred places in the UK. The island has been a place of pilgrimage for years and is uniquely cut off from the mainland twice a day when the tide comes in.

Lindisfarne was founded by Saint Aidan, an Irish Monk from the island of Iona - which at the time was the main centre of Christianity in Britain. St. Aidan brought his religion with him, and founded Lindisfarne Monastery on Holy Island in 635. In 654 St. Cuthbert, who was said to have the gift of healing and the ability to work miracles, came to Lindisfarne - eventually working his way up the church to become Bishop. When he passed away he was buried on the island, and pilgrims travelled to the island to visit the burial place of the saint. Holy Island remains a place of pilgrimage today, and is the final destination for those hiking the long-distance walking route; St Cuthbert’s Way.

Today, the island is a thriving community with lots to see and do on a visit. Drive or walk across the causeway and discover all Holy Island has to offer. Follow in the footsteps of the monks with a visit to Lindisfarne Priory, and learn all about the religious history of the island. The island is also popular with wildlife lovers, as the Lindisfarne Nature Reserve is home to a wide variety of birds, including eider ducks, oyster-catchers and herring gulls. Grey seals can often be seen playing in the waves and dolphins have even been spotted in the waters too. 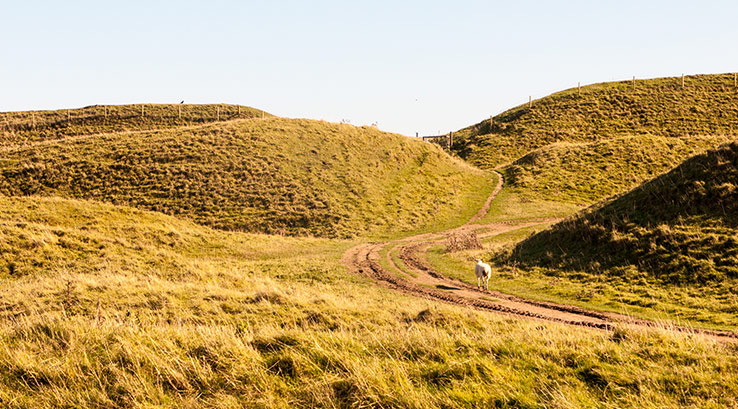 Throughout Dorset’s picturesque landscape you can see reminders of our ancient ancestors, and their beliefs. All over the region, remains of large stone circles and ancient hill forts can be found - which are shrouded in mystery about who created them and why.

The purpose of these stone arrangements remains unsolved to this day, and there are many theories surrounding their existence. One of the theories is that our ancestors placed them in the locations they felt the earth’s “energy” at its strongest. Many sites are believed to have been created for a religious or ceremonial purpose, and it’s the unknown aspect of these stone formations that make them such fascinating places to visit.

Lots of these stone circles can be found within 30 minutes of West Bay Holiday Park, including Kingston Russell stone circle, which is a circle of 18 fallen stones, created around 4,000 years ago. It lies at the junction of five footpaths, and there are lots of great walking opportunities in the surrounding landscape. Nearby, the Nine Stones stone circle sits hidden in a woodland area, and has a real air of mystery about it. As well as the close by Winterbourne Poor Lot Barrows, a collection of 44 Bronze Age burial mounds.

Finish off your tour of ancient Dorset with a visit to Maiden Castle, which is sure to spark the imagination. As one of the largest and most complex hill forts in Europe, Maiden Castle has a varied history. Built in the 1st century, it was a Neolithic settlement, a Roman temple and an Iron Age cemetery. Today, you can climb the ramparts of the ancient fort and enjoy the picturesque views over the surrounding landscape that our ancient ancestors deemed to be special.

Wanting to visit some more of the UK’s most magical places? Check out our favourite Fairy Tale Locations in Britain.